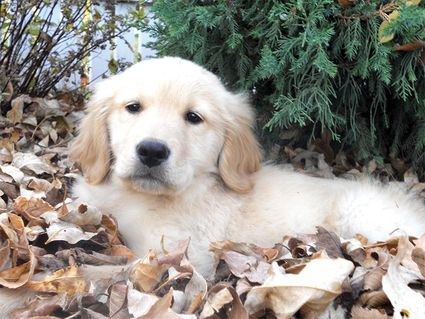 Kirby playing in the leaves

Eight months ago my wife and I suffered through the death of our beloved dog, Oscar. Coupled with the fact that our kids are all in college, our house has become an awfully quiet place. “Why don’t you just get another dog?” our friends would ask. Well . . . it’s not that easy. A dog that has been a part of your family for 13 years is not that easy to replace.

My wife wanted us to get a Labradoodle, which is a cross between a Poodle and a Labrador. That sounded like too much of a gimmick to me. There are now about 100 of these “designer” breeds, along with over 420 standard breeds, which makes it difficult to know what kind of dog to get.

“We need to choose a specific breed in order to know what ‘dog personality’ we’re getting,” my wife said. You can’t choose your relatives, it is said, but you can choose your dog. It is important to consider whether you want a lap dog, a hunting dog, or some other specific dog type. My last dog was an 85 pound lap dog, a mutt, but he was a great dog nonetheless.

A few weeks ago my wife decided it was time for us to move on the “new dog” issue. There was a kennel in South Dakota that was selling Golden Retriever puppies, we were told, and we could pick up one of these dogs in Dickinson.

When we met our new puppy in Dickinson, we couldn’t get over how cute he was. He was small (weighed only 11 pounds) and seemed timid and fragile. We were told that he was “the runt of the litter,” but has recently been coming out of his shell. A puppy like this needs a lot of love in order to meet his potential. But that’s how it is with all of us.

There were dozens of names suggested to us. I’ve always wanted to have a dog named Kirby – after Kirby Puckett, the baseball player. But my wife hated that name. When she saw our puppy, though, and called him Kirby – the name seemed to fit. So Kirby is his name.

Kirby is certainly the cutest puppy of all time. He was ten weeks old when we got him. A dog in that “infancy” stage needs to eat, drink, pee, poop, play, and sleep. And that’s what Kirby has been doing. We’ve been obsessing over his body functions. Initially I had to take him outside every few hours, even during the middle of the night. But now Kirby is better at “taking care of business” at reasonable times. We’re so proud of him when he pees and poops on cue. It’s just like having a baby. 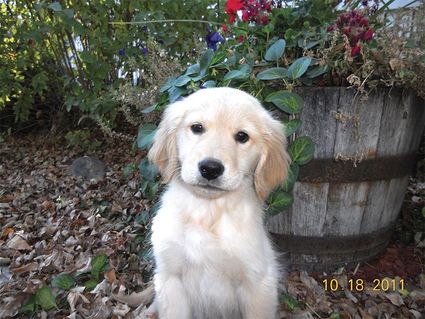 Kirby sitting tall in our yard

Kirby is now 13 weeks old. He loves to run circles around me in our yard, play fetch with a tennis ball, and chew on everything that he comes in contact with. He has overcome his shyness. According to Puppies for Dummies, a book written by Sarah Hodgson, he is now in the “terrible twos” stage of his development. Hodgson says that Budding Adolescence, Puppy Puberty, and the Trying Teens are puppy stages (in the first year of a dog’s life) that we will soon encounter. We’ve already realized, as she predicted, that Kirby would gradually take over the essence – if not the physical domain – of our home. And that’s not a bad thing. Kirby is extremely lovable. He’s also trainable, and likes to play the Sit, Fetch, and Come games – especially when he gets rewarded with doggie treats.

Now that we have Kirby, our life will never be the same. Maybe that’s how it is supposed to be. Pets are good companions. Pet owners tend to live longer and healthier lives. And our Kirby in particular has found a warm place in our home, and our hearts, and it’s hard to imagine how we ever survived without him.