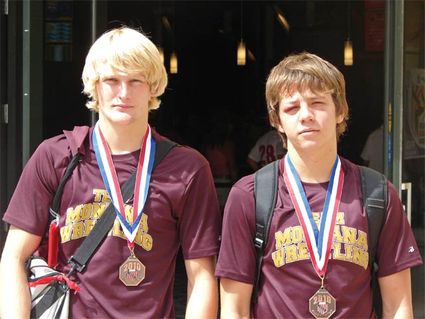 Florida Dual Team 2010 where Jayme Kelly, left, and Brennan Gorder both medaled at the event. Brennan and Jayme are 2011 graduates of Sidney High School and have been wrestling together since the age of 5.

With new passports in hand, two local wrestlers will participate in the USAW/AAU Cultural Exchange Program with Germany and compete against their top wrestlers from July 25-August 15.

Jayme Kelly, 20, and Brennan Gorder, 19, both of Sidney will be part of the Montana Team with Kelly competing in the 180 pound weight division and Gorder competing at 145 pounds.

Together they will compete in both Greco Roman and Freestyle wrestling while staying with host families.

For both, it will be the first time they have been overseas.

Together they will soon begin physically preparing for the competition by running and lifting weights.

“What I enjoy most about this sport is the sense of accomplishment you get from beating someone that seems unbeatable. I’m really excited about this experience but it is also going to be challenging because we will be wrestling competitors who are much older than us,” said Jayme Kelly.

This isn’t the first trip the two have attended together as team members. Last summer they competed at Disneyworld during the Florida Duals Team competition.

“What’s really neat about this is that they have wrestled together since they were five years old. As a mom this is really exciting. Going on this trip has been a goal of Brennan’s since he was in the eighth grade,” said Lisa Gorder, his mother.

Gorder’s family has always been active in AAU wrestling. His dad, uncles, and brothers Brady and Brodie all were once active on the team. His dad, Shane also served as the coach for over 15 years and only recently turned the reins over to a new coach last year.

“My goal is to win all of the matches. I’m excited to get over there and have some fun and learn about the culture,” Gorder said.

Older aged Montana wrestlers were selected for this competition because they will be competing against older wrestlers between the ages of 20 and 30 in Germany.

The program started back in 1992 with each country hosting alternating years. This year, the wrestlers will travel to Stuttgart, Germany and travel around the southwest part of the country while participating in several different tournaments.

While wrestling is their main focus, they will also have an opportunity to see some of the sights including the Munich Olympic Center, and the Porsche and Mercedes Benz automotive plants.

The cost to participate in the program is approximately $2,200. A small portion is covered by the AAU Program and the wrestlers will have to pay for the majority of the trip themselves.

This year’s team is being coached by various coaches from across the state.