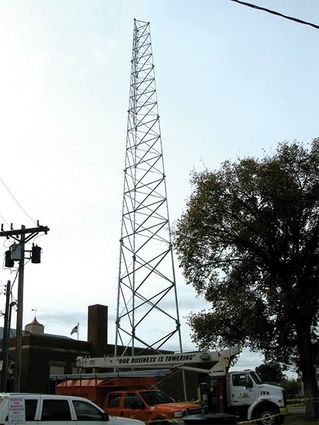 The new tower is located behind the Nutter Building on West Main St. in Sidney.

Disaster & Emergency Services coordinator Butch Renders explained the new tower going up in Sidney. In an effort to improve communications within the City of Sidney and the county, Richland County is erecting a self-supporting communications tower behind the Nutter Building on West Main Street. The original purpose was to improve handheld radio communication for law enforcement in the city. When an officer enters a building, communication with dispatch is compromised. Not only can the officers not call out, but safety checks by dispatch are not always heard, resulting in the dispatch of additional officers to check on the welfare of the first. With the new tower, officers and dispatch will be able to communicate much better.

The other major beneficiary is the city public works department. They will now be able to communicate with workers in town, plus the new tower should enable them to talk to garbage truck drivers as far as the landfill.

Disaster & Emergency Services will have the ability to talk to all their entities, including fire and EMS, throughout Richland County in the event of an emergency.

Ham Radio capability is also on the agenda. The system has a backup generator to ensure continued function during a power failure.

The communications tower is just a part of the continuing effort to link the county facilities, with the system eventually reaching all of Richland County.

Renders will resign his position as DES coordinator on January 22, 2013 after 21years. Deb Gilbert, who started September 25, has been hired as his replacement.