Cooking For A Colony 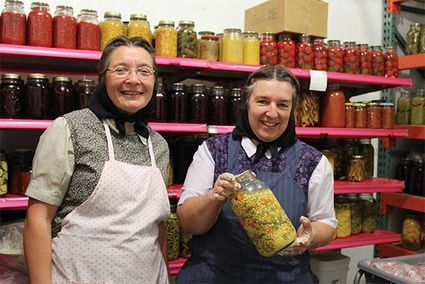 Annie Marie Walter and Barbara Walter stand inside their canning room where hundreds of jars of neatly stacked fruits and vegetables are stored for consumption by the Colony members.

Some of us fret over what to cook for an average sized family of four or five. We stress over how to keep the meals exciting, healthy and enticing enough to make sure everyone willingly eats it. And for many, the thought of cooking for large groups of people is enough to put us over the edge with frayed nerves and nervous stomachs. So, it’s difficult to imagine what kind of pressure a person might feel cooking for 56 people every day of the year with the exception of Sunday; for years to come.

It seems natural that when Annie Marie Walter was promoted to Head Cook for the Prairie Elk Hutterite Colony of Wolf Point, she had mixed emotions. She was proud. And, she was fearful.

She knew it was an honor to be given this job because it meant the Colony members had faith in her culinary capabilities and expertise. Yet, it was also a huge responsibility. One she is still adjusting too. “That very first day I wondered to myself, ‘what am I doing here.’ I’d rather be anywhere but here in this kitchen. It was nerve racking,” she recalled.

Her mornings begin at 5:30 a.m. with a cup of coffee and long ‘to do’ list. Ovens need turning on. Counters need a good wiping. Stewing vegetables need chopping. Sauces need stirring. Meats need thawing, seasoning, marinating and plenty of time in the broiler. And once all of that is complete, it’s already time to start thinking about the next meal that needs preparing. And the cycle continues.

In an effort to limit wasting food, Annie Marie carefully plans her meals so that everything is eaten. If left over stewing meat is available, it will be used for roast beef sandwiches the next day or incorporated into a soup or other side dish.

Though it took some time for her to get into the rhythm of her new job, she was not a newcomer to the kitchen, having started learning how to cook with her mother, Annie, when she was 17 years old. Cooking is a vital part of life in the Colony for the women. Most begin cooking in the kitchen when they reach the same age.

The kitchen is run on a fluctuating schedule with two women serving as cooks for one week and then rotating out into other chores such as baking and cleaning. Since becoming Head Cook, Annie has been taken out of the rotation and only focuses her efforts on planning the meals for each week, making the menus and preparing the meat of the day. It keeps her plenty busy. “I miss seeing all of the women more often. Now I am in the kitchen all day so I don’t get to visiting with all of them as much as I would like,” she said.

Of course, even before Annie assumed her new title, everything still ran smoothly in the kitchen. The work in the kitchen runs much like a well oiled machine, fast, efficient and clean. With large industrial sized appliances more fitting of a chain restaurant than a household, Annie has plenty of stainless steel apparatus, stove burners and refrigerator space to get the job done. But, you won’t find any pre-made boxes of stuffing, scalloped potatoes or the sinister, Hamburger Helper taking up space in her cupboards. Nope. Everything’s made from scratch. And, it’s most likely every ingredient in the freshly prepared meals was raised or grown right on their farm.

Annie Marie became Head Cook following a vote made by the men of the Colony. “We were happy to see her become head cook because her father, Darius, is in charge of the finance and she has always had some input into what the kitchen might need or other things we wanted for cooking,” said Rose Anna Walter, a Colony Member.

“Never before was there a head cook designated for this Colony since the move. So, it just took more work for the two women cooking. Now, I wonder how they got by without one. Having a Head Cook makes it easier for the two cooks because they aren’t running all of the time. Instead they can focus on their main priority which is the side dishes,” Annie Marie said.

The tradition of Head Cook is nothing new for the Colony. It just took a few years to find the right fit. Before Annie Marie took over the position it had been vacant for nearly seven years. Before the Colony split and members came out to live in Northeast Montana, Mary Walter worked as the head cook back in Surprise Creek starting in 1967. She was 31 years old when she began and for 25 years she loved her job. She remembers getting up early to get breakfast ready. She would then plan and prepare the lunch meal and head back to the kitchen at 3:30 p.m. to start preparing dinner. By the time she got the kitchen cleaned up and stocked for the next day it would be nearly 7:00 p.m. “I miss it now. But for those who don’t like it as Head Cook, too bad. You’ve got to do it for the Colony if that’s what they want,” she said. Mary stepped down as head cook in 1992 following surgery on her rotary cuff which made heavy lifting difficult.

Of course, once Colony members reach the age of 50 they can retire from the kitchen if they want to and just help with other chores like cleaning. But many Colony women continue with their duties well past the conventional age of retirement. “There is a Head Cook for a Colony in the state of Washington that is 70 years old who still works and cooks for 110 people,” recalled Barbara Walter.

The Colony split from the Surprise Creek Colony in 2006 when it became too large with 125 members and is located some 15 south of Wolf Point.