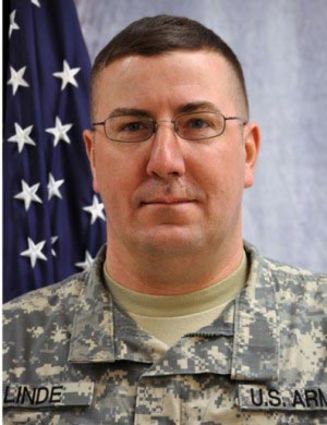 Darren Michael Linde was born May 12, 1971 at Fort Wainwright, Fairbanks, Alaska to Dwight Linde and Deborah (Dashner) Buxbaum. He attended schools in Sidney, Montana and graduated from Sidney Senior High School in 1989 where he wrestled for the Sidney Eagles. As a Sidney Eagle, Darren was a proud member of the 1989 State of Montana Wrestling Champions. He attended Montana State University, University of North Dakota-Williston, and the University of Mary.

On December 28, 1990, Darren enlisted in the North Dakota Army National Guard. On May 25, 1995, Darren went active duty with the Army and was stationed at Fort Lewis, Washington. While in Washington, Darren met and fell in love with Adrienne and her three daughters Celina, Kayla, and Alexis. On August 2, 1997 they were married and shortly thereafter had a son, Eric Paul Linde.

Darren was so funny. Everyone who knew Darren, knew he was always smiling and laughing. Darren never had a bad day. He always saw the glass as half full and always had a great story to share. The family's nickname was the "Six Happy Linde's" and that was how they lived their lives.

Darren returned to Montana and enlisted in the Montana Army National Guard from September 1998 to September 2002; and again in July of 2005 through March 2006, when he then transferred back to the North Dakota Army National Guard. From June 4, 2007 through May 21, 2008, Darren was deployed to Iraq with the 164th HQ's SECFOR. On April 27th, 2012, Darren was deployed to Laskar Gha, Afghanistan with the 818th Engr Co. On March 11, 2011, Darren earned the rank of Sgt 1st Class. Darren was a Combat Engineer, Cannon Crewmember, and Bridge Crewmember. He received numerous awards, including the Iraq Campaign Medal, Afghanistan Campaign Medal, Combat Action Badge, North Dakota Legion of Merit (Posthumously), Purple Heart (Posthumously), and the Bronze Star (Posthumously).

Darren was killed in action on December 3, 2012 in Lashkar Gha, Afghanistan. 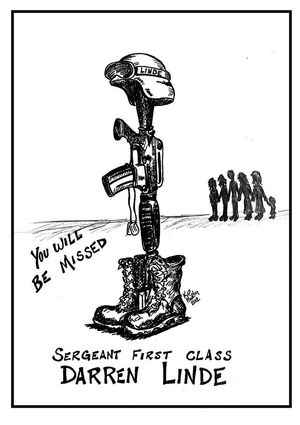 Darren was preceded in death by his brother, Eric Buxbaum.