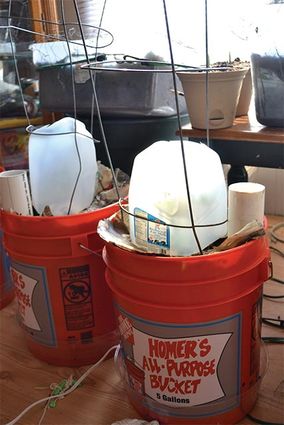 With a love for tomatoes, Steve and Gloria Harris have started up their tomatoes in these 5 gallon buckets. The pvc pipe is used for watering purposes, while the milk jugs give the plants extra protection.

For those who like to plant and grow their own vegetables, the current conditions may be causing a late planting. With this decreasing the amount of growing time, some gardeners may choose to get their seedlings started indoors and transfer them when the weather allows.

Just about any container will work for this, whether it be a soda bottle, a plastic tote, a 5 gallon bucket or just a plastic cup. Just fill them up with soil, plant the seed and find the most sunlight you can find. To improve drainage, some gardeners will drill small holes in the bottom of the containers as well as putting a layer of gravel under the soil.

Most seedlings cannot handle a lot of moisture at once, so it would be best to use a spray bottle when watering them. Any stream of water could disturb the dirt and potentially harm the little plants.

When the seedlings grow their second set of leaves, it’s time to move them to a bigger container. But, this is easier said than done. The tiny plants are really delicate.

Locals Steve and Gloria Harris have been starting their garden as they get antsy for the ground to thaw and the temperature to rise. With the use of plastic totes and 5 gallon buckets, they have gotten a decent head start on their garden for this spring.

Starting out in the totes, they planted their seeds and kept the lid on to keep in the humidity which would help them germinate. They have done this with both red beets and carrots, which are making good progress thus far.

To get their tomatoes and cucumbers going, they have used 5 gallon buckets with a piece of pvc pipe for watering purposes.

When determining the best planting dates in the spring for seeds, the date of the last spring frost is important to your success. With the calculation of prior frosts, the Farmer’s Almanac has estimated the best planting dates for seeds both indoors and outdoors. This does not factor in other elements such as soil temperature, nearby water along with other differentials.

Some vegetables require longer growing periods which require them to be planted earlier than our climate here will allow, especially this year. 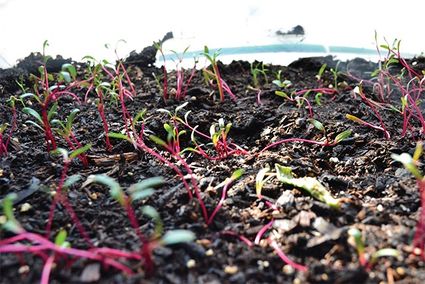 Steve and Gloria have also planted some red beets to get ready for their garden once the ground thaws.

The following are the suggested dates for vegetable seeds to be planted indoors in the Sidney area: Broccoli, Brussels sprouts, Cabbage, Cauliflower, Celery, Peppers and Tomatoes should be planted between March 19 and April 2; while Lettuce, Cucumbers, Melons, Pumpkins and Squash should be planted mid to late April.

If not, they may be planted indoors to get a jump start. Steve and Gloria Harris have done just this, as they have planted their beets and carrots and already have some good sprouts.

Don’t let this nasty cold weather stop you from starting up your garden.