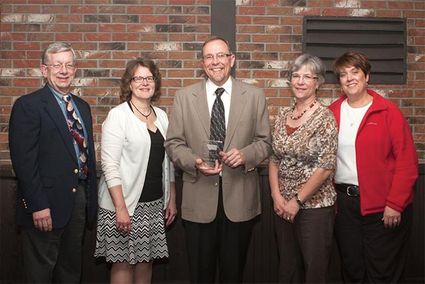 This year’s Montana Credit Union Network Professional of the Year is Kevin Mayer, manager of Richland Federal Credit Union. He was presented with the honor at the Network’s Annual Meeting, held recently in Great Falls.

“I am delighted that Kevin was nominated by his peers for this prestigious award; he does so much to represent Montana’s credit unions, it’s nice that he’s getting some recognition in return,” MCUN President and CEO Tracie Kenyon said.

Mayer has worked for nearly 30 years at Richland FCU. His service to the credit union system as well as his community is admired by many.

Beth Redlin serves as the board chair and said Mayer not only brings a vast array of credit union knowledge but provides excellent guidance to the board.

“He has positioned us to weather a number of storms,” Redlin said. “He is forward-looking in what things will affect our institution and options we have to address them.”

Mayer served on the MCUN Government Relations Committee and as a board member of the former Treasure State Corporate Credit Union. He is a founder of MonDak Chapter of Walleyes Unlimited. He serves as a church trustee, is active in the local Lions Club and sometimes finds time to golf, fish and hunt.

Mayer is a strong proponent of financial education. He serves on the business advisory council at Sidney High School and provides a strong financial education program for every eighth-grader and high school senior in the community. It’s an easy environment for Mayer since he comes from a family of teachers.

So he’s been volunteering in the schools since 2006 delivering the message of financial well-being. At Sidney High, it’s in Brad Faulhaber’s classes.

“He means a ton to the community and the students in my class,” Faulhaber said. “The kids absolutely love it. He gets them to pay attention and understand, which says a whole lot about his personality.”

Faulhader isn’t surprised about Mayer’s recognition as Credit Union Professional of the Year.

“He is so deserving,” he said. “Kevin is just a great guy that is concerned about the next generation, wants to make Sidney a better place and is willing to dedicate whatever time is necessary to help out. I don’t know if you find many people that are willing to do the things he is willing to do.”

Faulhaber may not be surprised but Mayer said he is shocked to receive the award.

“It means a lot,” he said. “When I look at the past recipients, it makes me feel good because I have the utmost respect for those individuals.”

Mayer is a graduate of the University of Montana and serves on the Grizzly Scholarship Association. In 2005, he received the university’s community service award.

Right after he graduated from college, he spent seven months repossessing cars in San Jose, Calif. He says that gave him the backbone to deal with people but when an employment opportunity with Glendive Production Credit Association became available, he jumped at the chance to return to his hometown. And besides, he admits, he’s just not a big city kind of guy. So he’s remained in Eastern Montana near his family, which he says always comes first in life.

Mayer says he’s believed in credit union philosophy since he got his first car loan. And, he practices that philosophy every day with his dedication to dozens of facets in the community.