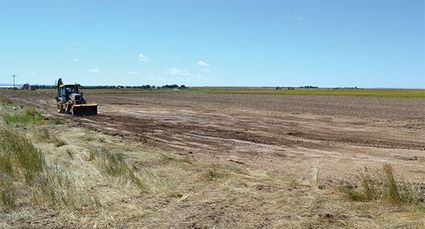 Oil pipeline leaks are of concern to everyone. However, a small leak discovered recently by farmer Jerry Satra was taken care of quickly and efficiently. Satra discovered the oil on Saturday, July 27 while picking rock. The initial area was small, only 4 – 5’ in diameter.

He notified Ray Kordonowy at XTO Energy who had a crew out on Sunday to investigate. Their digging revealed a leak in the pipeline belonging to Tesoro, and Monday, Tesoro was on site removing contaminated dirt and repairing the leak. By Wednesday, the cleanup was complete.