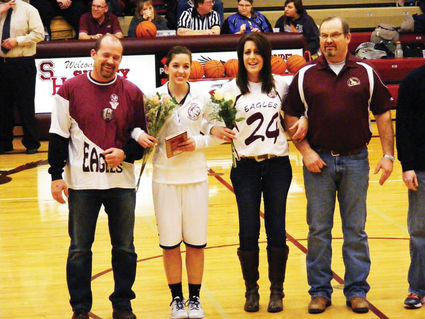 Lexi Prevost with her parents Curt Prevost and Leigh and Roger Merritt.

Senior Night for the girls basketball was held last Friday during the home game against Laurel. Seniors, with their parents, were acknowledged for their accomplishments and dedication to the team. This year's team consisted of two seniors, Daryn Wolff and Lexi Prevost.

Coach Jace Sullivan had the following to say about the two seniors: 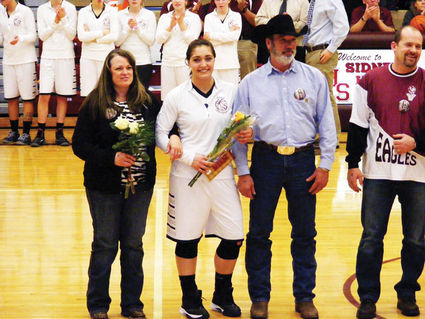 Daryn Wolff with her parents Darold and Kelly Wolff.

Daryn is a very hard worker whose impact on the game is sometimes not written about in the paper or kept track of in the box score. Her energy and athleticism lead to extra possessions for the team through getting loose balls and rebounds. She works very hard to get her teammates open. She understands what is means to sacrifice "me" for "we". She is very tough and battled knee pain and asthma throughout her career. We have to remind her sometimes that she needs to be careful to get breaks to help her asthma, or she will play herself into not being able to breathe. Her willingness to help others extends to her work with animals through her involvement in 4-H. Daryn plans to attend Miles City Community College to become a veterinary technician and be a member of the rodeo team. SHS will miss Daryn next year.

Lexi has demonstrated what it takes to be successful and she is a leader for the team. Lexi is the only player that took on the challenge to the team to make 10,000 shots during the offseason. She didn't just get 10,000 but she moved on to get 16,000 shots made. She understands how important it is to put energy and effort into something to get results. Her work ethic extends to the clubs she is a part of and most importantly her academics. Lexi has signed a letter of intent to play basketball for MSU-B in Billings. SHS will miss her next year, but her example of dedication and work in the offseason is a model for future SHS players.