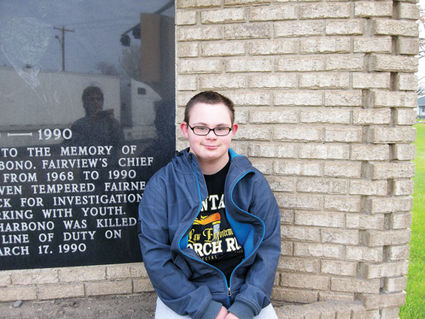 After winning gold medals in the 100 meter run, bowling, standing long jump and the tennis ball throw at the regional Special Olympics in Miles City, Dean Risinger of Fairview is excited about competing at the State Special Olympics in Billings May 13 – 16. He will compete in the tennis ball throw, the standing long jump and the 100 meter run.

Risinger, who was born with Downs Syndrome, is a freshman at Fairview School. His family, including his mom Michelle Judd, moved to Fairview in 2005 and got involved in Special Olympics. Michelle and Dean both work hard selling tickets for the state pickup drawing. Because of Dean's efforts, he has been chosen for the Norbie Challenge at the state games. Three names are chosen to receive extra money for their region to help with travel or equipment expenses. "It's an extra special thing during the closing ceremonies," Judd explained.

This is the second time Risinger has been chosen and Judd credits the outstanding support from Fairview and the area. "The support has been amazing," she said. Ticket sales help those from Fairview with $4 out of the $5 ticket price coming back. "I do it for Dean, but also for everyone else in Fairview," Judd said.