A Big Week of Bulls in the Bakken 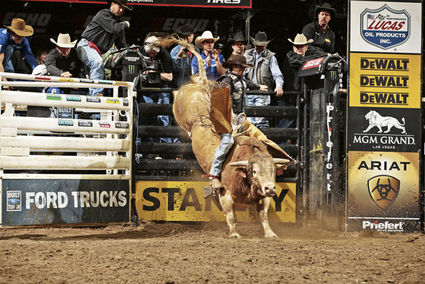 Margy Time posts 45.25 points against Ben Jones. Jones will be one of the riders coming to the area. (Photo by Andy Watson / BullStockMedia.com)

There's a lot of action and a big four days coming up for PBR fans and Bull Riders. The PBR Touring Pro Division will be in Williston, ND June 25-26 and Sidney, MT June 27-28. Start time for both bull ridings is 7 p.m.

Bucking in Boomtown in Williston will be held at the Upper Missouri Valley Fairgrounds. The Bull Blow Out in Sidney will be at the Richland Co Fairgrounds.

"We usually wouldn't have two events 45 miles from each other in the same week," said Shane Gunderson of the C'N Stars Bull Company, producer of both events. "With the influx of people in the area working in the oil business, there's more than enough people to fill the seats."

The Bull Blow Out in Sidney will feature C'N Stars Bull Company PBR Finals bull Buck Wild. The infamous Buck Wild has a 76.47 percentage buck off rate and an average mark of 22.43.

On the rider side of things, PBR World Finalists and Built Ford Tough Series riders Ben Jones of Australia, Austin Meier of Oklahoma, Brant Atwood of Texas and North Dakota's own Stetson Lawrence highlight the field.

"We are looking forward to four great days of Bulls in the Bakken," said Gunderson.

Expect to see some outstanding bull riding and enjoy the beer gardens at both events.