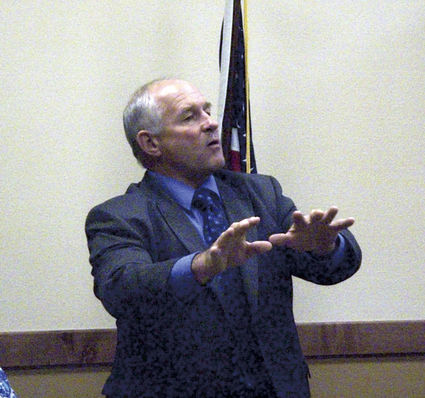 Gregory Mohr discusses his 28 years serving as a judge.

The hour and a half long debate welcomed written questions from the attending community providing an opportunity for voters to get to know the candidates and have specific concerns addressed. A common theme throughout the debate was how the oilfield and the population increase directly and indirectly affected different aspects of the county including an increased need for officers, an increased workload in the judicial system, funding for the county, infrastructure and education.

Some of the topics covered were law enforcement being understaffed to which both Dynneson and Renders agreed there is a need for temporary housing to draw officers and their families to the area; a continued need for cost-effective officer training was also discussed.

An increased caseload in the courts due to the influx of people in the area was an issue addressed by both Mohr and Christoffersen (Bidegaray was unable to attend and had a written statement read on her behalf).

Weber discussed the need for him to, reluctantly, take on more of an administrative role and act less as a practicing attorney in order to ensure work is addressed in a timely manner.

More than one inquiry was made about plans to receive state funding and both Knotts and Scott Staffanson agreed that funding infrastructure is a priority and that appeals would continue to be made.

The divvying up of school funds was addressed by Gail Staffanson and she explained that the needs of each school varied and so varied how they determined to spend allocated funds. For instance Lambert used funding to build housing for their teachers while Sidney doesn't have readily available access to land to do the same. The Common Core Curriculum was also brought up and Gail Staffanson clarified that this curriculum was only being used in math and reading in local schools and test scores in Montana are some of the best in the nation.

Voting will be held Tuesday, November 4 from 7am to 8pm. Voter registration closed October 6, however late registration is available by going to the Clerk and Recorder's Office on the third floor of the Richland County Courthouse at 201 West Main Street in Sidney. All candidates encouraged residents to turn out on Election Day and be involved in the direction of the community.