Fitzgerald Trucking Thanks Vets for Their Service Every Day 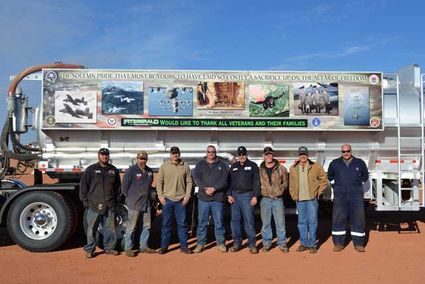 For Al Fitzgerald, owner of Fitzgerald Trucking in Watford City, it seems there cannot be enough said or done to convey the appreciation he has for all of the veterans who have honorably served the United States of America. That sentiment prompted a mobile "thank you" in the form of a custom made billboard Fitzgerald had mounted on one of his trucks. The sign was made by Perma Letter in Billings, MT with all of the pictures being from his brother, Rick Fitzgerald's service in the Air force. Rick Fitzgerald passed away in 2006 shortly after his third tour of service in Iraq.

"I believe that as a society we have never and will never have the right to truly enjoy our freedoms until we first learn to receive, respect and embrace the individuals that have greatly altered or completely sacrificed their lives to secure these freedoms for this great country," replied Al Fitzgerald when asked what prompted him to have the sign made.

What has been described as a simple thank you is making an impact across the area. Drivers of the truck have noticed a lot of recognition from people they meet on the road whether it is a honk and a thumbs up or a silent thanks mouthed by other drivers, it seems that even a quiet act of appreciation goes a long way.

Local veterans who met to show their support of the sign unanimously agreed that show of gratitude meant more to them than they could express.

Neil Parks, who joined the Navy at seventeen noted that, "This standard of living is the highest the earth has ever seen and it's because there have been people willing to sacrifice and go through war to have this freedom. A lot of blood has been shed and a lot of lives lost for what we have. I hope people will look around the world and understand the privilege of being an American."

"More people should show their support of (military) services," said Army Veteran John Moran and Hector Vonheeder, formerly with the Army, agreed that there should be more awareness. "It's a great thing Al's done," Vonheeder commented of the billboard.

There are plans for the other two trucks of Fitzgerald's Trucking to be outfitted with similar signs, one to give specific recognition to Vietnam Veterans and Prisoners of War and the other focusing on those who've served in Iraq and Afghanistan.

"When people see it, it sparks interest," said Cooper Lowe an army veteran who also works as the night driver of the truck." There are lots of people who are or were in the military out here in the oilfield. People see the sign and it makes them think."

"I hope people take a moment of reflection for the fallen when they see the truck," commented Steven Snider who served in the United States Marine Corps. "I hope they think about those who've made the ultimate sacrifice for our freedom."

And in a word one veteran sums up what words struggle to express, "Semper fi," he says smiling. A well-known motto of the US Marine Corps, it means always faithful, as our troops are to this country and as we should all be to those who've served us well.

My brother is the one driving this truck. Im one of those proud members still serving. Thank you Fitzgerald Trucking for your king gesture. No matter how small it may seem to some, military members find it encouraging. Im lucky to be in the states and at the same time bringing the fight to ISIL. God Bless America.