Williams to be Inducted into AAU Hall of Fame 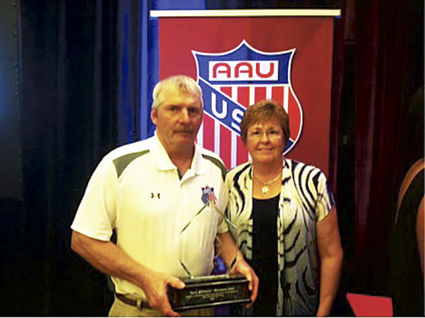 Terry Williams with his wife Luann at the convention.

Terry Williams of Sidney, MT, was recognized for outstanding service and achievement by the AAU.  At their 124th annual convention this past week in Fort Lauderdale, Florida, the National AAU announced that Williams will be one of this year's inductees to their hall of fame. Williams has been a member of the AAU for over 25 years.  He has been a coach, officer and referee for the Montana AAU. He is on the National AAU Wrestling executive board, referee for several local and national AAU tournaments and a state sports chairman. Hall Of Fame induction is one of the highest awards given by the National AAU. (Submitted by Amanda Cortez, Montana AAU Secretary)