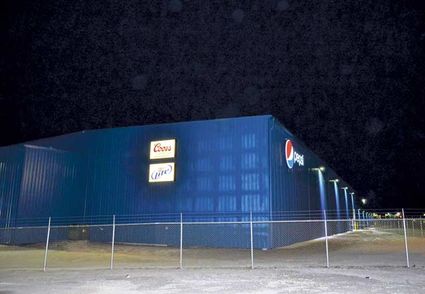 Blue Rock Companies has significantly expanded its facility with the addition of a 29,320 sq. ft. storage and loading addition and approximately 50,000 sq. ft. unloading and parking area.

Blue Rock Companies has significantly expanded its facility with the addition of a 29,320 sq. ft. storage and loading addition and approximately 50,000 sq. ft. unloading and parking area.

The proliferation of new items and variations in the soft drink, beer and wine industries prompted the addition. Vice president Randy Olson and General Sales Manager Lance Averett estimated that items have at least quadrupled in the last 10 years. "We have 30 kinds of Gatorade alone," Olson said. The new addition provides more inventory storage, more efficient ordering and loading of trucks. The number of docks and forklifts have been doubled. With increased capacity comes an increased need for employees. "We are always looking for well qualified, hard working employees," Averett said,

General contractor Big Sky Siding and Windows and local subcontractors completed the building. It was designed to be as energy efficient as possible. The addition is taller than the adjoining building, allowing Blue Rock to stack more pallets. There are approximately 5 1/2 miles of water line in the concrete to provide heat in the floor, while 24' diameter fans circulate the air. LED lighting and a quality drainage system add to the efficiency. "We are thrilled with the quality of construction," Averett said.

Since the city water supply could not keep up in the event of a fire, Blue Rock installed three 20,000 gallon water tanks to supply the sprinkler system in the addition.

Blue Rock plans to move into the new addition shortly after the first of the year. "It will be full of inventory and vehicles," Averett said. 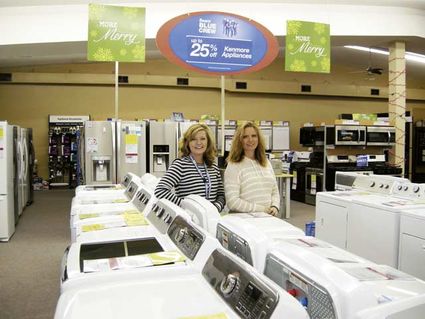 Sears Hometown Store opened September 20 in the TriFecta Home Center building. Sisters Becky and Teresa Benson said a Sears store was the original idea when they purchased the building but the previous owners wanted to see the furniture store continue. Sears has recognized the need for a presence in smaller communities and, after lengthy negotiations, allowed the store-in-a-store concept. The Sears/TriFecta combination is one of only a few in the country.

Bensons said the store has gone really well. "The stores compliment each other. We had customers asking for appliances when we were just a furniture store," Becky said. "People are pleasantly surprised at how much we have to offer," Teresa stated. Sears offers the top 10 brands of appliances and the Sidney location offers all the Sears Hometown Center nationwide sales events. There are over 100 appliances on the floor, and any Sears product can be ordered. People also like the Sears backed service and warranties.