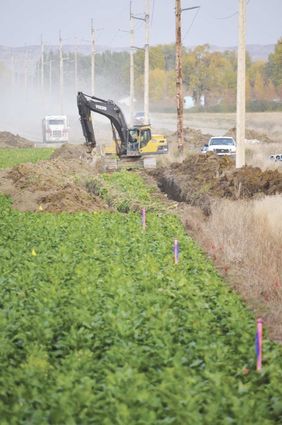 For some area residents, the convenience of turning on the faucet and enjoying a drinkable glass of water is now a refreshing reality following the recent completion of a water pipeline project by Dry-Redwater Regional Water Authority. It will also create a new flow of money from the users enabling DRWA to continue with other projects that have been in wait because of the lack of federal funding.

"This is huge for us. By getting the Sidney South line up and running, we hope to be able to qualify for low interest loans and grants so we can continue to expand," said Mandi Nay, Coordinator for the DRWA.

Without any federal funding, Richland County made the decision to pay for three miles of needed pipeline in an effort to help move the Sidney South mini-project forward. "They saw a need for it and had the ability to support us and our efforts to make this project continue to move forward," said Nay.

Currently they are soliciting funding to further extend the Sidney South pipeline so that it will continue further down Highway 200 and also east as far as the Yellowstone River.

Their next mini-project will get pipeline extensions just outside of Circle, with the town of Circle supplying the interim water supply. It will include areas along Highways 13, Highway 200 Horse Creek Road, and North Road.

They also have plans to run a line from Culbertson over to Fairview and use Culbertson's water supply as the interim water source. Once complete, the water pipeline would benefit the town of Fairview and an estimated 115 users along the way.

For those working to see the project through to completion, it has been a tremendous uphill battle at the federal level. The Dry-Redwater Regional Water Authority got its start in the early 2000s when local conservation districts consisting of McCone, Garfield, Dawson and Richland counties wanted to address the issue of poor water quality and quantity in the area. In 2006 it became apparent they would have to abide by the Rural Water Act passed by Congress that year. The Act was created in an effort to standardize water processes with oversite from the Bureau of Reclamation.

The Act has been difficult to comply with because the interim rules of the Act allow for expectations to change constantly. "It seems like every time we complete something to meet their specifications, the rules are re-interpreted and we have to start all over. Until we can get through the processes as required by the Act, we are not eligible for federal funding which makes it very difficult to make quick strides in this process," Nay said.

In an effort to continue with the project, they are focusing on smaller areas and using the money generated from other users to complete them. All of the pipeline is still in the plan to be built so that when funding is secured, the project can be fully operational once complete.

If the DRWA is able to secure federal funding in the future, the project could move forward at a much faster pace. However, a project of this size, with the needed funding, could still take between 10 and 40 years given the amount of pipe that has to be laid. Without the cooperation of the federal government, it could take even longer.

In 2012 a feasibility study conducted by engineers projected the completed project would encompass 11,791 square miles in five counties and benefit some 15,000 people. It would cost 223 million.

DRWA has secured land on the North Fork of Rock Creek at Fort Peck and water rights for usage of just under 4,000 acre feet annually once the project is complete. In the interim, they will utilize local municipal water systems as they are allowed.

"The communities have been very supportive since we started this and the State of Montana has been wonderful. It's all of the red tape at the federal level that just makes you want to give up sometimes. But, we aren't going to stop. No roadblock is too large because this means too much for our communities. It won't break us," Nay said.