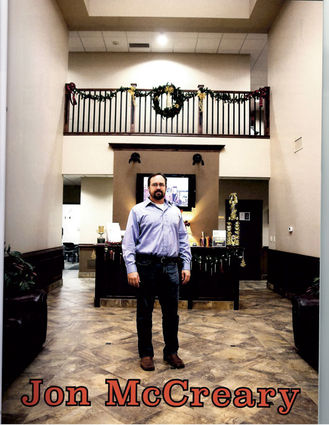 WILLISTON: Selected from dozens of potential candidates by the Talkin' the Bakken editorial board, Jon McCreary, owner of JMAC Resources, was chosen as the first annual Bakken Person of the Year 2014.

The title of Bakken Person of the Year is given to a person who affects the community in a very positive manner: somebody who displays leadership, selflessness, innovation and gives back to their community.

McCreary, who grew up on a farm in the Columbian Basin Irrigation Project in a giving family, learned what it meant to 'give to those in need' at a young age. His parents befriended people that others avoided, served their church and gave to people in need. He graduated college with degrees in accounting and finance and later became the Chief Financial Officer of a publicly traded commercial bank, but his goal and ambition was to go back to his independent roots and exercise his entrepreneurial skills while running his own company.

McCreary fulfilled that goal in 2007 when he purchased JMAC Resources. Within his first year of ownership he tripled the company's sales and JMAC Resources has steadily grown in service areas, continually meeting the need of the marketplace ever since.

McCreary is not a self-centered man by any means. In fact, he is the exact opposite. McCreary has a strong will and desire to give back to the community and to help others in need. He and his company recently won a community service award from the Williston Chapter of the American Petroleum Institute for giving back to the community.

JMAC is very active in community organizations. In the past they have provided coats and snow pants to needy children in local schools, provided aid to those facing domestic abuse, participated in cleanup projects sponsored by city and industry affiliates, collected food and pajamas for local drives, participated in the Little League World Series 'Chef of the Day' concessions fundraiser and the Million Dollar Lanes Make A Wish Foundation fundraiser.

In January 2013, McCreary was asked what his greatest accomplishments were and he replied, "Above all the business accomplishments we have achieved as a company, I am proud of how our success has enabled us to provide our employees with well above average compensation levels. Our success has also given us all a great opportunity to give back to our community and to the less fortunate."

The Roundup congratulates Jon McCreary on the well-deserved recognition of being named the Bakken Person of the Year.