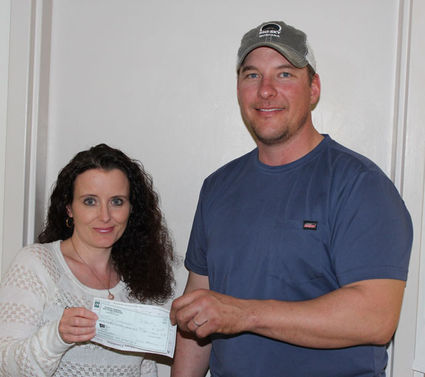 Guy Salvevold, of Culbertson, was this year's winner of the first annual Ice-Breaker Fundraiser, sponsored by the Roosevelt Memorial Healthcare Foundation. He received a check for $727.50 from the 50/50 raffle. The ice broke three miles south of Culbertson on March 18, at 11:25 p.m., according to a clock-device observed continually by Steve Baldwin, an RMHF Board Member. Salvevold guessed March 19, at 1:15 a.m., which was the closest estimate to the actual time the ice broke.

The Foundation will use their $727.50 portion of the raffle winnings to help with the replacement of the cracked window in the resident's Sun Room. "I think it's important for the community to support these kind of fundraisers because many organizations depend on them to make needed improvements that can't always receive a line-item in the budget, but are still greatly needed," said Salvevold. The window will cost an estimated $18,000 to replace. To date, a total of $8,543 has been raised toward the project.

The Foundation hopes this new fundraiser will become something the community will look forward to each year and that it will grow as it gains popularity.