Williston Honors Winners Of "Mayor For A Day" Essay Contest 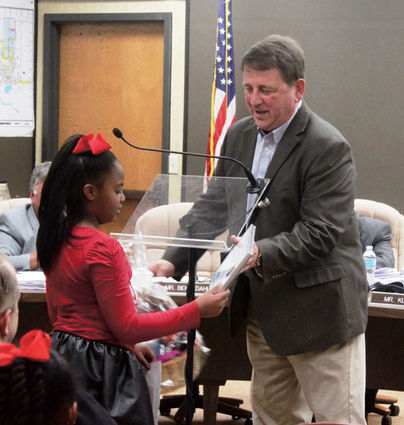 Two Williston third graders have been recognized for their "If I were Mayor for a Day" essays. Ja'Waya Cason and Baylee Brouilette received first and second place respectively in the contest. They were honored for their winning efforts at a recent Williston City Commission meeting.

The contest is held in conjunction with the North Dakota League of Cities statewide "Mayor for a Day" essay competition. After the League of Cities wraps up its judging the Williston entries are forwarded to Williston Economic Development for scoring. Williston Mayor Howard Klug was even involved in the process. He joked that it was a good thing he joined non-biased individuals in scoring the essays.

"I was partial to the essay that said 'The current Williston Mayor is awesome!," he teased.

The contestants read their essays and received a plaque and gift bag on behalf of the mayor and the commission. Both of the students noted that if they were mayor, keeping Williston clean was a priority. Cason, a member of Ms. Beckstead's class at Hagan Elementary School, also wanted to help less fortunate families with basic necessities such as affordable housing, food and clothing. Meanwhile Brouillette, a student in Mrs. Heller's class at Lewis & Clark Elementary School, emphasized the importance of recycling.

Baylee Brouillette wrote: "... If I were Mayor for the Day the schools in Williston will go outside, every day in the afternoon and pick up all the garbage. And don't put everything in the garbage bin put recycling material in the recycling bin. ..." 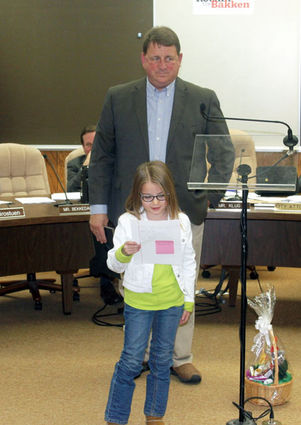 Mayor Klug also gave the first place winner the option to either ride with him in the Band Day Parade or help him cut a ribbon during the grand opening of the Williston Center for Development office building. Klug advised Cason to 'take some time to evaluate her decision' and get back to him.

The essay contest helps encourage youth to learn about leadership opportunities in their communities.