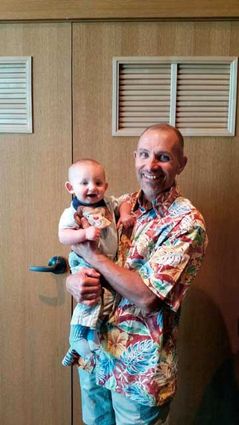 Biebl with celebrant at his retirement party in June.

Family Support Specialist, George Biebl, has retired after 33 years with Hi-Line Homes. Initially beginning his career in teaching, Biebl began working with the early intervention program February 1, 1982 in Wolf Point, MT. In September of 1982 he moved with his job to Culbertson, MT, working with families in the surrounding area and in May of 1983 he settled in Sidney, as it was centrally located among the families he worked with.

"Working one on one with families was a good fit for me and I felt like I could be more efficient. Because of teaching, I'd had experience with school-age children but I learned about early childhood development as I went," said Biebl of his career transition.

Established in 1975, Hi-Line Homes is a free and voluntary program which offers support to families that have children with developmental needs be they motor and or cognitive dysfunction or health conditions that cause developmental delays, the ultimate goal being to keep kids at home in a family setting. While Hi-Line Homes works mostly with children prior to kindergarten, services can be continued into school if the child has an intensive need; this became a possibility for the program in 1990 when Montana began receiving Federal funding which covers about 70% of Hi-Line Homes' expenses.

"Early intervention takes advantage of a time when the brain is developing the fastest and children are the most adaptable," Biebl explained.

Over the years, he estimates that he's worked with 15 to 20 families at once, however over the last year, he worked with 20 to 25 families at one time. Family Support Specialists out of the Glasgow office will be servicing area families during the transition.

As of July 1st, Biebl has officially embarked on the adventure of retirement. He has always been active in the community with organizations such as the Lions Club, church, Pheasants Forever, and serving on the Richland County Tree Board and plans to stay involved. He plans on keeping busy gardening, traveling, and hunting and is looking forward to having both of his children in the area, with his son already living in Sidney and his daughter moving back in the next year.

"I've always liked Eastern Montana and I've always liked Sidney and I'm going to keep being involved and give back to the community. I have been out of college for 40 years and have worked for Hi-Line for 33 years... it was time," said Biebl. "I like working with the families and getting to know them and I will miss that, but I am looking forward to having freedom of time."