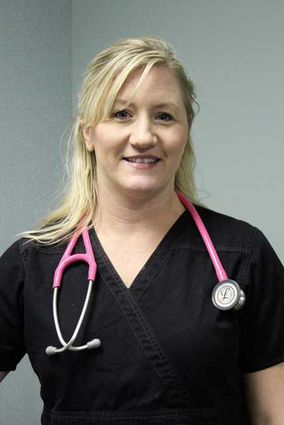 Roosevelt Medical Center has recently promoted Karla Hunter, a clinic nurse, to serve as the new clinic coordinator. With her new job title, she will be responsible for the day-to-day management of the clinic and its' staff members.

"The best part of working in healthcare is making a difference in the lives of the patients. It's that reaction you get from them when you know they are feeling better and, in part, it is because of you," she said.

Karla attended several colleges and received her bachelor's degree in nursing from Miles City College in 2005. She was employed at Sidney Health Center for 10 years and has worked in obstetrics, medical surgery and the clinic. At Glendive Medical Center she also worked in psychiatric care.

"One of my long-term goals for the clinic at RMC is to ensure we are contacting patients after they leave to check on how they are doing with their care plans and treatments," she said. "We want people to know how much we truly care about their health and well being."

Hunter began at RMC in 2012 as a traveling nurse and was hired in 2014 to work full-time as a staff member.

She has three children: Emily, 18, Kade, 12, and Beau, 9. This January she will be getting married to Dr. Michael Fink, a chiropractor, in Sidney.