100 Years Of Growth And Service To Community 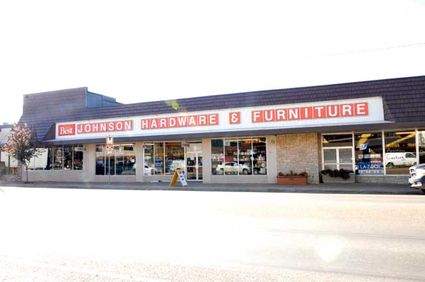 Johnson Hardware and Furniture began as Johnson-Mercer Hardware in 1915 as a Marshall Wells hardware merchant. The store was owned by three Johnson brothers – George, Gil and Axel – along with partner Andy Mercer. It was located on the same block as the current location, but in a different building. In 1924, George and his younger brother Carl bought out Gil, Axel and Andy and the store was re-named Johnson Hardware.

A new 35-foot wide building was added in 1925 and is still part of the store. Later additions to the back of the building were also made. In the late 1920s, the business added John Deere tractors to its lineup of hardware products. Business was very challenging during the Great Depression and the implement dealership was dropped in favor of furniture and the name was changed for the last time, becoming Johnson Hardware and Furniture. Business remained difficult during World War II until the economy stabilized following the Allied Victory.

Sidney experienced strong growth the next decade and in 1956 the family business grew with the addition of Carl's oldest son, Hubert. That same year, George passed away. Carl passed away January 1957, leaving his wife, Prudence, as a widow until her death at the age of 94 in June 1993. Hubert's younger brother, Paul, joined the family business in 1959 and together they owned and managed the store for the next 37 years.

The store had five employees then, including Hubert and Paul, when the two brothers embarked on an expansion of the business that continued through the '60s, '70s and into 1980. The store changed suppliers in 1959 switching from Marshall-Wells to Our Own Hardware, a larger and modern hardware wholesaler with a strong presence in the Upper Midwest. Two years later Hubert and Paul expanded the business from a 35-foot store front to 50 feet and expanded the basement as well, adding significant display space for furniture. A major expansion took place in 1967 when the two brothers remodeled the rear of the store and added 12,000 square feet of display area. The old Sidney Hotel building to the south of the store became available in 1975 and the business grew in size again. Two years later in 1977 the old Turner Drug store building to the north went up for sale and the business added another 8,000 square feet. The store front was now 110 feet in length and three stories of display. It encompassed more than 30,000 square feet of showroom space with several thousand more feet of storage space and had nearly 20 employees.

During this time of growth the store had owned several small warehouses. The brothers purchased the local Pepsi Cola bottling plant in 1980 to use as storage space. This more than tripled the warehouse capacity to 8,000 square feet of storage space. The growth of the business in both size and inventory put it in perfect position to enjoy the rapid sales growth during the oil boom of the late 1970s and early 1980s.

Paul's oldest daughter, Kristine, and her husband, Chip moved to Sidney in 1992 and began the transfer of ownership to the next generation. In 1996 Paul purchased Hubert's interest in the family business and his youngest son, Philip, came to work.

The new, young team of Johnsons embarked on the next generation of expansion, beginning with the merger of Our Own Hardware into Do It Best Corp in 1997. Do It Best, consists of more than 4,000 retail stores in 13 countries. It is the second largest hardware wholesaler in America with more than $3 billion in annual purchases from manufacturers. Buying power like this gives small family-owned stores like ours the buying power to compete with anyone. Buying power also comes into play in the store's furniture and mattress departments. Johnson Hardware and Furniture is a proud member of Furniture Leaders, a furniture-buying-group consisting of 88 member stores in 12 states. Philip served on the Furniture Leaders Board of Directors for seven years and led the organization as Chairman of the Board for three years.

What began as a small hardware store in 1915 has expanded into a large retail establishment with many accomplishments. The business was honored in 2002 as the Montana Family Business of the Year by the Montana State University College of Business. Also in 2002, the Sidney Chamber of Commerce recognized the Johnson family as that year's Heritage Family. The Sidney Chamber honored the business with the Horizon Award in 2008. The store has been recognized numerous times by Valspar Paint as a Top Performer with Do It Best, including the past three straight as the #1 paint retailer in the company. The store has also been recognized by the Whirlpool Corporation as a top-5 retailer in the National Hardware Distribution Network, which includes,Do It Best, Ace and True Value hardware stores nationwide. The store has been recognized in local surveys as the #2 draw for out-of-town customers and the #1 favorite store in town. In a recent local newspaper poll, Johnson Hardware and Furniture was voted the Best Furniture Store, Best Hardware Store and Best Home Improvement Store.

During the past 100 years the Johnson family has been proud to serve the citizens of Sidney, of Richland County and beyond. One thing that has always been a part of the business has been family. To date, nearly 30 different members of the Johnson family have worked at the store. In addition to Gil, Axel, George and Carl, Paul and Hubert both worked at the store as children, as did all six of their children. Hubert's wife, Lucille, was the "Toy Lady" for more than 25 years as she ordered, stocked and sold toys to children and their parents at Christmas time. Paul's wife, Barbara, was the store's official Christmas gift wrapper for many years. Every Johnson child and grandchild worked at the store when they were growing up. Today Kristine, and Philip's wife, Joy, manage the business office. Philip,manages the Home Design Center and Chip oversees the Hardware Center.

In addition to family, Johnson Hardware and Furniture has been blessed over the years with many loyal employees, some of whom have worked for the business for more than 20, 30, and even 50 years. While there are too many to name, we do want to thank some of our longest-tenured employees, including: Bernadette Barbula; JoAnne Christensen; Grace Corchran; Edward Cunningham; Marlene Dornhecker; Delmar Dschaak; Jeannie Dunn; Charlotte Guptil; Crystal Hatter; Jeanette Koch; Edith "The Paint Lady" Norby; Susan Opsta; Clint Radke; Elaine Rang; Kevin Reitz; Jim Sampson; Rick Stone; Carol Struckman; Grant Wicks and Lois Wilson. 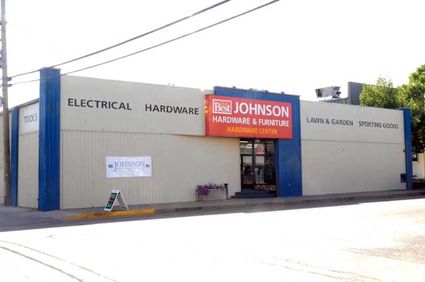 And most importantly, Johnson Hardware and Furniture and the entire Johnson family wants to thank all of the support from its loyal customers...old and new...young and old. From the first birthday or Christmas gift, to high school graduation, weddings and home ownership, Johnson Hardware and Furniture has enjoyed being a part of our customers' lives and a vital part of the community. Our family is proud to have operated our business in the same location since the birth of the automobile, and through the Great Depression, World Wars I and II, the turbulent '60s, the economic malaise of the 1970s, Y2K, three oil booms, floods and droughts. Through it all we've grown and prospered and are excited to have survived it all. We couldn't have done it without a supportive community, reliable employees and a strong family. Thank you!