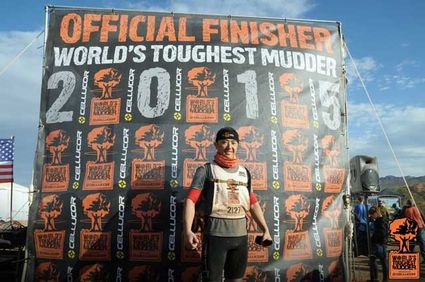 As the director of Williston Public Works, Dave Tuan runs an organization that deals with a fair amount of mud and muck, but it's when he's off the clock that he really gets his hands dirty.

Tuan spent many months training for the difficult race. "My training regimen included months of upper-body exercises, trail running and swimming," said Tuan. "While I spent a lot of time using the great facilities at the ARC (Williston Area Recreation Center), my best preparation for the environment of Las Vegas came from running and swimming in areas around Williston, including Spring Lake Park and the Little Muddy River."

More than 1,000 people from all over the world participated in the World's Toughest Mudder on Nov. 15-16, 2015. During the 24-hour timed race the five-mile track remained the same but the obstacles changed. There was one challenge in particular that required a high level mental toughness; a 30-foot cliff jump, at night, into the frigid water of Lake Las Vegas. "I'm not a very strong swimmer so I was concerned going into the race; especially knowing there would be extended periods spent in the water," said Tuan. "The cliff jump was especially nerve racking and many people chose the ½ mile penalty loop with an electrocution and mud obstacle, rather than face the mental challenge of jumping."

It was a different challenge, however, that banged up the 31-year-old engineer in the early going. He broke his nose just a couple of miles into the race, although the injury didn't have a significant impact on Tuan's overall performance. "Injuries and hypothermia seem to be the biggest threat to competitors," said Tuan. "Going into the race, I was so focused on completing the obstacles that I didn't pay close enough attention to my surroundings and jumped face first right into a metal bar, breaking my nose. As bad as that sounds, it didn't really slow me down much, thanks to the field medical staff."

Later in the race Tuan slipped off a platform and hit his mouth on a handrail. While the injury hampered his ability to eat and drink, Mother Nature made things even more difficult during the nighttime when the temperature dipped to 30 degrees in the Las Vegas desert. "Rather than risk hypothermia, my teammate and I were forced to make a tough decision to break for a couple of hours in the middle of the night to warm back up and continue running," explained Tuan. "Living in a northern climate definitely paid off because we were able to recognize when to take a break – we saw a lot of people succumb to hypothermia quite quickly."

Despite the harsh conditions, Tuan said the World's Toughest Mudder is known for its camaraderie, stressing teamwork and overcoming fears. Competitors are often part of a group or they bring along a friend to help assess injuries, stay nourished and keep motivated. In all, Tuan ran 40 miles during the 24-time period. "It was very humbling to be able to help some of the toughest athletes in the world overcome difficult obstacles and it was a good reminder that we all need a little help from time to time.  Being a part of this community and knowing that support was there for everyone, despite the fierce competition, was a very satisfying feeling," said Tuan. 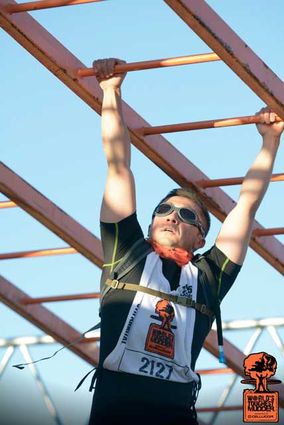 As a prelude to the Tough Mudder, Tuan led a Williston Public Works team in the city's first-ever obstacle race, the Bakken X Trek at Spring Lake Park in September.

So is there another Tough Mudder on the horizon for Tuan? "The Tough Mudder was meant to be a one-time challenge for me, however, my goal was to surpass the 50-mile mark and I fell short of that. While I'm happy with my performance, a part of me would really like to do better," he admitted.

In the meantime, Tuan said the Public Works group is very excited to run the Bakken X Trek in Williston again next year and they hope to bring an even larger team representing more City departments to the obstacle course.