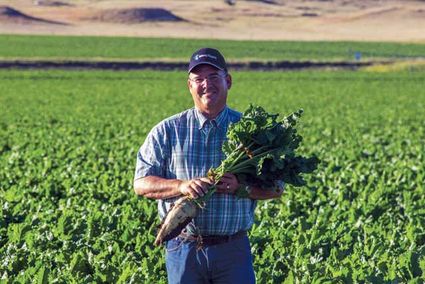 For the second year in a row, Sidney Sugars completed a record harvest, averaging 32.3 tons per acre and 18.73 sugar for the 2015 season. The crop was visually deceiving other than in the Savage area where they got an early start and no hail. "Other areas surprised us," agricultural manager Russ Fullmer said. Root samples were good with the tonnage estimate raised three times. The weather cooperated with warm, not too hot, days and cool nights in September. The new Roundup ready beets produce really well as long as they have moisture and heat. Harvest was phenomenal according to Fullmer. Sugar just kept going up and up during the 20 days of digging. The last station was done October 27.

Express Service supplied enough people to staff all the stations. "The labor situation at the factory is a lot better," Fullmer said. Farmers had to fight the construction at the Sugar Valley, Fairview, station this year but the new roundabout should make things smoother next year.

The beets are storing well so far with the consistent temperatures, even though it has been warmer than normal. The beets came in clean so the piles are clean, making them breath easier. Fresh air can also be pulled in to cool off the piles. Sidney Sugars growers had the highest percentage of sugar in the nation. "We never imagined tonnage like this," Fullmer said. "We had 38 addendums which did over 40 tons per acre."

Sidney Sugars rewards them Top 10 growers each year in January. "We have an individual in the Top 10 with 40 tons per acre and 19% sugar", Fullmer said.

There are also a couple of growers who will join the 20-20 Club, something that hasn't happened since 2007.

Sugar prices are rebounding especially compared to other crops grown in the valley. "Beets are hard to raise and it takes a lot of money, but the rewards are worth it," Fullmer said. Sidney Sugars has begun contract negotiations with the growers.

With two consecutive record harvests to his credit, Russ Fullmer is retiring on a high note. "30 years have gone by fast," he said. Fullmer flew in to Sidney mid February 1985 to look over the position and the town. "I accepted the job but it was pretty desolate back then." What he found were good people everywhere he went. The traveling for his career ended and he and his wife raised their family here. He also found the best beet growing area in the U.S. "It's amazing country," he said. Fullmer has the utmost respect for the beet growers. "The Scandinavians, if you get on their good side, will take care of you and give you the shirt off their back. The German Russians started in Colorado and gradually made their way north to farm the Yellowstone Valley. They're good farmers," Fullmer said. "Only the cream of the crop have survived."

Fullmer has no immediate plans to move. "We'll be here for awhile,"

Congratulations on your retirement Russ and best wishes for the next stage full of laughter and good times!