Three Sidney Parks Were Upgraded Through Grants and Donations in 2015 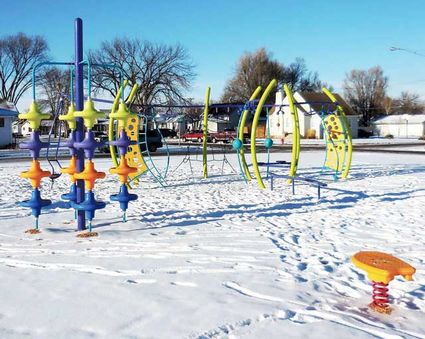 The new playground equipment at Quillings Park is just one of many improvements local parks saw in 2015.

During the warmer months of 2015, the City spent considerable time and energy upgrading Watertower, Quillings, and Lalonde parks. Watertower Park received new bleachers, dugout benches, and a new fence, as the old fence was a maintenance issue for the City. The new fence was pushed back sixteen feet allowing more room for mowing, adequate space for growing trees, and an eventual ADA compliant sidewalk. City Park Superintendent, Stephanie Ridl, received a Richland County Recreation Grant which covered the cost of the new equipment; additional funding was given through Public Works which provided new dugouts and the Girls Slow Pitch Softball League donated new bases.

Ridl also received a Land and Water Conservation Grant that was given through Montana Fish and Wildlife to install new playground equipment in Quilling Park, including an agility based gym for ages two to twelve, new swings, two spring-ride surfers, and popular climbing wall called the Matterhorn. ADA compliant ground cover was also put in which makes the playground more accessible to wheelchairs and strollers and benches give parents and caregivers a place to sit near the playground. Other changes to be made include ADA compliant sidewalks and ramps. While there were lots of changes to the community park, some equipment remains the same such as the stagecoach and small play gym.

Lalonde Park also had new equipment installed; in November of 2015 a play gym, swing set, and merri-go-round were set and the swings and ground cover will be added in the spring of 2016. The playground equipment was donated by the Kringen family in memory of Randy Kringen and is a great example of how donations can make a big difference. Donated funds can be used to purchase trees, benches, picnic tables, playground equipment, or can be given to a specific project. It is very important to Ridl that donors are involved in where and how their contributions are used.

Donations of time are also quite welcome, as the City Crew is always busy, especially during the milder months.

Ridl's goal is to eventually upgrade all the city parks to meet ADA standards and 2015 proved to be a big step in the right direction. She has plans to renovate the bathrooms and concessions stand at Watertower Park and the bathrooms and warming house at Quilling Park. She is currently reaching out to businesses and individuals for donations for Take Part in Our Park, an extensive community effort to enhance Veterans Memorial Park, in hopes to install new benches, trash can receptacles, an ADA compliant ramp to the stage, and a park sign archway over the walking path that leads to the flag poles, Governor Nutter's statue and the Holly Sugar train. All projects are to be completed before the Billings Symphony performs there in the summer of 2016. For anyone interested in making a donation or volunteering their time, contact Ridl at City Hall, 406-433-2809 or at 406-480-9263.