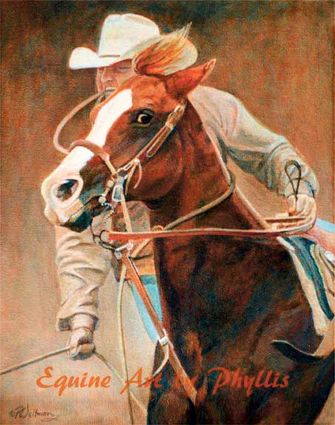 Artist Phyllis Waltman was born on a small ranch on the rugged Western Slope near Delta, Colorado. Early on, she was both drawing and riding horses so it's no surprise that her artistic focus is the horse. Painting with precise yet sensitive detail, she captures the expressiveness of these magnificent creatures, portrayed in a unique, dry light that illuminates her scenes and surrounds her subjects. Her work has appeared in shows across the country including the Churchill Downs Museum (home of the Kentucky Derby) and has received numerous awards throughout the region. In addition, Waltman¹s art has been the subject of articles in Equine Images, The Artist¹s Magazine, Western Horseman, Equine Art News and Equine Vision and has graced the cover for several years of the Denver Polo Club Annual magazine as well as issues of Horses West and Horses in Art. Waltman's artwork has been chosen by Equine Affaire for use in promotional materials including program covers, t-shirts and posters related to events in California, Ohio and Massachusetts. Equine Affaire is billed as the nation's premiere national equine exposition with a show in Columbus, Ohio, drawing over 100,000 people.

Phyllis has also published a book that tells a story in her own photographs, of a newborn mustang colt who is fiercely and tenderly protected by his sire during a dangerous raid by bachelor mustangs. The book, "Sunny Boy and Little Sonny" is available on her website http://www.artforthehorselover.com.

Through a set of fortuitous circumstances a few years later, Phyllis and her husband were able to adopt Little Sonny and now provide him with a loving home in Cody, Wyoming. Phyllis has several paintings available at the Blue Buffalo Art Show now on exhibit at the MonDak Heritage Center. A reception will be held on Saturday, January 23, 2016 with a live performance by Bob Petermann, cowboy poet and singer, which starts at 1 p.m.