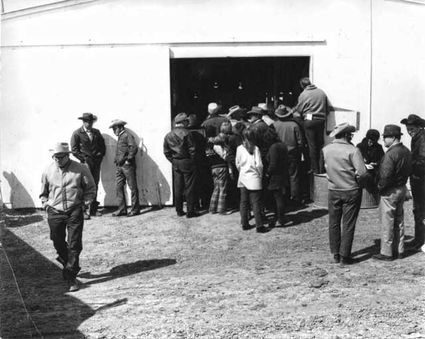 A crowd at Gartner-Denowh's first bull sale in 1968, held at the ranch.

Gartner-Denowh Angus Ranch (GDAR) is located just on the outskirts of Sidney, MT, a close-knit family run ranch that focuses on raising efficient and functional cattle bred for the commercial cattle operation. GDAR began in 1957 when Joe Gartner and Russel Denowh bought 20 head of registered Angus cows from a dispersion sale in Montana. In 1974, Russ and his son, Micky, bought out Joe Gartner but kept the commercial name. At this time, they were calving about 150 cows and selling around 60 bulls per year. Russell's other son, Paul, joined the operation in 1984.

GDAR expanded in 1990 when the Blue Mountain Ranch was purchased. This purchase added 13,000 acres of native range and is used for summer grazing.

Micky, Paul, Casey and Chad Denowh all run the ranch together along with their families. GDAR is proud to be a family run operation, and they are now marketing 225 bulls a year. New methods and technologies have been added to the ranch since 1957, but the core principles behind the program remain the same.

GDAR is an operation made up of grazing land, but they also have some farmland on which they raise freed. The ranch calves around 800 cows and heifers each year, and with varying Montana weather with weeks of below zero temperatures and summer days reaching 100 degrees, their cows are expected to endure and thrive with mother nature. 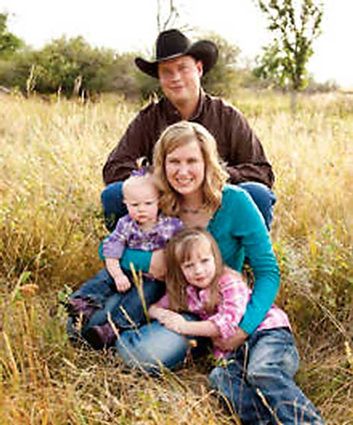 Chad and Jennifer Denowh with daughters Danica and Cambree

In fall, GDAR's cows are fed a low cost and low energy diet to weed out any inefficient cows, which means cows that can't function on a low input system in their environment are culled from the herd. A majority of GDAR's bulls go to commercial operations in a similar environment to their own, and their goal is to make sure their bulls surpass their expectations.

While GDAR's environment and location is tough and can create a lot of extra work, they are able to test their genetics in such a harsh and varying location, meaning that GDAR can only make their genetics more functional, more efficient, and more profitable.

Gartner-Denowh Angus Ranch has been family run for over 50 years, and they are proud of the business and cattle they have established in the community. Stop by and visit, or call them at 406-798-3541.