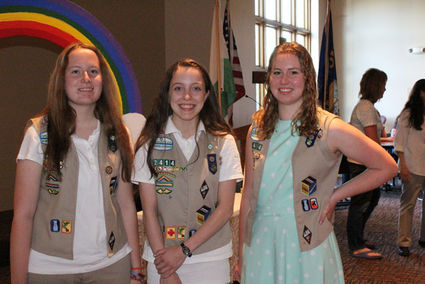 Leaving the Girls Scouts program in Sidney after their high school senior year are, from left, Kaitlyn Tibbits, Sarah Turek and Shelby Reidle.

When a Girl Scout sleepover was held more than 10 years ago, Sarah Turek and Shelby Reidle first became good friends.

"Because neither of us could sleep," Reidle explained.

Last week during the year-end ceremony, Kaitlyn Tibbits, Turek and Reidle finished their high school careers as Girl Scouts. They each were members since the second grade.

Great relationships are one of the many positives from Girl Scouting. The three girls, who graduated from Sidney High School May 22, have remained reliable friends.

Reidle added that Girl Scouts gave her the confidence and experience needed for public speaking. "And it just made me more willing to be more active in the community."

Turek noted, "Community involvement is definitely a huge part of it. You also get exposed to a lot of interests and activities."

When they were in junior high school, the girls earned their Silver Awards for creating a CD featuring favorite Girl Scouts songs. "We got some of the younger girls to do the echo parts," Reidle said.

Because of busy schedules it was harder for the girls to stay as involved in Girl Scouts during their high school years. But Reidle is still working toward her Gold Award which is similar to the Boys Scouts' Eagle Scout honor.

Reidle has sewn 30 art smocks for youngsters to use at the MonDak Heritage Center. She is also working to assist the center's traveling trunk program, which allows teachers to use historical items from the heritage center in their classrooms. She is half-way to the 80 hours needed to earn Gold Medal status.

Each of the girls have favorite memories from their Girl Scout years. One of those experiences was camping at Fort Peck and seeing the musical held at the Fort Peck Summer Theater.

They are a little sad that their troop that once consisted of nine girls finished with three. "As life got busier, more girls did sports or other activities instead," Turek said. "But we still have fun."

Although they still like to eat them, selling Girl Scout cookies wasn't a favorite in most recent years. When she was younger, however, Tibbits sold the most cookies for two straight years. She explained the award came because her step-dad took over "everywhere" in North Dakota.

"Of course, the younger girls are cuter so they sell more," Turek said. "I definitely don't want to go into sales."

The girls are thankful the time their Girl Scout leaders Joan Turek and Becky Reidle spent with them.

Outside of Girl Scouts, the three girls were very successful in the high school's speech and drama program. Each of them qualified for the state competition this school year. Tibbits placed at state in classical duo. Turek and her classmate Camden Berka earned first in classical duo this year. It was the first state title ever in drama for Sidney students.

"I'm pretty sure everybody on the team was crying when it happened," Turek said.

Reidle and Turek were two of Sidney's valedictorians this year.