Will the Real Supporters Please Stand Up? 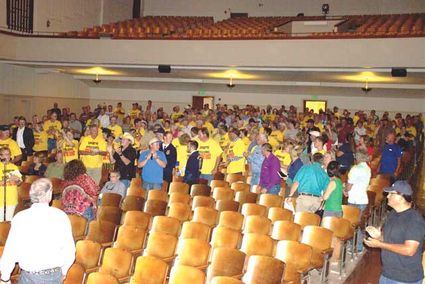 Hundreds of people stand and clap after being asked by Tami Christensen of Sidney to stand up if they support the Intake fish bypass alternative at the meeting held in Billings on June 30. Many of the supporters wore shirts reading "Support the Bypass Channel. Save the Farmer!"

Hundreds of members of the public gathered at meetings in Sidney, Glendive and Billings this week regarding the Intake Diversion Dam Fish Passage Project. Staff from the U.S Department of the Interior Bureau of Reclamation and U.S. Army Corps of Engineers Omaha District presented six alternatives to determine the future of the Lower Yellowstone Irrigation Project. The public was then open to express their comments and concerns regarding the possible alternatives.

David Trimpe of the Bureau of Reclamation and Tiffany Vanosdall of the Army Corps of Engineers presented six alternatives in a new Environmental Impact Statement (EIS), three of which were already studied and presented during meetings held in 2015 regarding an initial Environment Assessment (EA) of the fish passage project. The additional studies were added to address the injunction placed on moving forward with the preferred fish bypass project by District Court Judge Brian Morris.

The many members of the public included hundreds of residents, farmers and business owners from Eastern Montana and Western North Dakota. Several individuals stood up to publicly give their comments. The comments, emotional at times, were heart felt pleas to save the livelihoods of farmers and not devastate the economy by implementing a costly and unreliable pumping water delivery system, a system inferior in many ways to the reliable gravity fed water delivery system that has been used for over 100 years to provide irrigation to the 58,000 acres of cropland in the area.

"You guys don't want pumps," stated Barry Rakes, from Fallon, MT at the Glendive meeting on Wednesday. Rakes is the president of the Buffalo Rapids Irrigation District that supplies water for the Fallon and Terry area farmers. Rakes described many of the issues with the pumping system they use. Not only are the pumps expensive to use but they are not reliable, a fact that is hurting the farmers in Fallon and Terry this year. At the Billings meeting Rakes explained, "You can lose an entire crop before the pumps are fixed and running again."

Many current and former local and state elected officials spoke in favor of the fish bypass option as well. Former local politician and co-owner of Tri-County Implement in Sidney, Walt McNutt shared his insight on dealing with environmental groups in the state legislature. "They want a win-win only if you take out the dam," he said. "They won't give up and they will keep fighting you forever. They are obstructionists." A few of the other elected officials that commented in favor of the bypass option included Duane Mitchell, Scott Staffanson, Richard Cayko, Matt Rosendale and State Senator Taylor Brown of Billings.

A few members of the opposing groups that filed that lawsuit that resulted in the injunction were also present at the Glendive and Billings meetings. The groups opposing the fish bypass alternative include the Defenders of Wildlife, Natural Resources Defense Council and Trout Unlimited. They all stated that they were not out to take away the water rights of the members in the LYIP but that they were sure the fish bypass option would not work. They sighted that no pallid sturgeon had been proven to use a fish bypass. But recent data has shown that pallids have taken side channels and also have been able to cross to the other side of the dam using a slough.

Written comments can be submitted until July 28. The completed EIS including the comments will be presented to Judge Morris for him to determine if the injunction will be lifted. Comments can be submitted three ways: handwritten or verbal at a public meeting; email: [email protected] or by mail to U.S. Army Corps of Engineers Omaha District, Attn: CENWO-PM-AA, 1616 Capitol Avenue, Omaha, Nebraska 68102.