A Community Says Farewell to a Priest, Neighbor and Friend 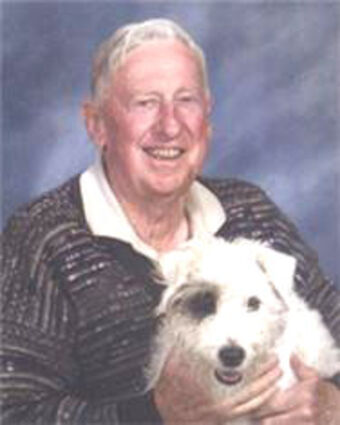 Father Edward "Ned" Shinnick was a priest to many, and a friend and neighbor to even more. He left a lasting impression of kindness, good humor, and faith on those who knew him. Fr. Shinnick was born in Fermoy, County Cork, Ireland on July 24, 1931. He attended St. Columban's Seminary and finished his studies at St. Patrick's Seminary in Thurles, Ireland.

He was a man who came to Montana in good faith. After seminary school, he was ordained for the Diocese of Great Falls - Billings in 1956 and was then assigned to St. Philomena Parish in Sidney, which would later become St. Matthew Parish. From the fall of 1961 until the summer of 1976, Fr. Shinnick would serve as an assistant priest, teacher, and administrator to parishes in Miles City, Moore, Medicine Lake, Culbertson, and Scobey, before returning to Sidney.

Parishioner and friend, Al McGahan met Fr. Shinnick in 1984 and recalls a man who was very down-to-earth.

"He was just a person that you could talk to and joke with. He never wore a collar when I knew him, and he was a friend to everyone," McGahan said. "He could deliver a story, and if he really liked you, he'd call you an orangutan."

Fr. Shinnick wasn't a man to push religion, but rather come down off his pulpit, down to pew level and share the message. When visiting Extended Care or the hospital, he would stop and visit with everyone and performed many non-Catholic weddings and funerals for those he cared for beyond his church.

Fr. Shinnick started building his cabin in Crane, MT in the mid-eighties, which he dubbed "Ballyhooly" after his hometown. Parishioners at the time came out to help him build it and Fr. Shinnick prided it on being the most 'un-American' home in America, because he only did the work he had the money for, and wouldn't take out a loan. "Ballyhooly" would be where Fr. Shinnick celebrated 25 years in Sidney, his eightieth birthday, and his 60th anniversary as a Catholic Priest, surrounded by hundreds of friends.

After his retirement in 1996, he continued to fill in for the five parishes in Richland County. He also loved to play golf, racquet ball, and pinochle, and was inseparable from Cain, the little terrier he had from 2001 until 2015.

LeRoy Strasheim was married by Fr. Shinnick 38 years ago, and he too speaks about the larger-than-life man who lit up a room when he walked into it.

"He was competitive and very good at racquet ball. I remember having a conversation with someone who'd played against him, and they told me how he'd won even though they were about 25 years younger than him. I don't know of anybody he'd ever lost to actually," remembers Strasheim.

During his retirement, Fr. Shinnick and a group of men including Strasheim would get together for Saturday morning breakfast at the M&M Café or Sunny's and discuss everything from bible verses to sports to politics.

According to both McGahan and Strasheim, Fr. Shinnick could talk to anybody about anything. He went back to Ireland every year around August to visit family, and to Texas in January or February each year to visit friends. He was also involved with community organizations including the Knights of Columbus, Kiwanis, and Richland Emergency Shelter Coalition.

Fr. Shinnick passed away on Aug. 30, 2016, leaving behind a community with countless memories of the Irish priest who had made Montana his home, and made his friends like family.

"He touched the lives of everyone in the community and many people beyond that. The Diocese in Great Falls set up a webpage in honor of Fr. Ned and the last time I checked it had about 41,000 hits. That gives you an idea of what he meant to people," said McGahan of his friend.

"I feel very fortunate to have known him as a priest and as a friend. He thought of me as a confidant and that's something that always meant a lot coming from him," Strasheim said. "I'm going to miss him. We're all going to miss him."