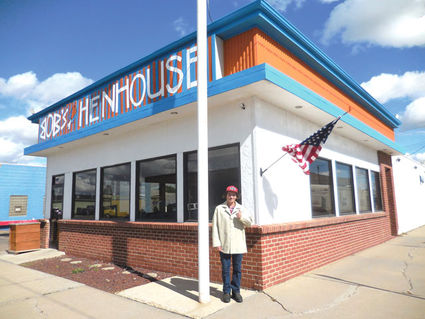 Bob's Hen House will be holding its grand opening on Saturday, Sept. 17th starting at 11:00am until the food is gone. Formerly Kentucky Fried Chicken, Bob's Hen House has a new recipe, a new look, and a new owner. Bob Blair opened the business on Aug. 18th after about six weeks of cleaning, painting, and putting up the new signs, which Blair designed himself.

Blair moved to Sidney in 2008 and found employment at Sidney Sugars starting on the beet end; eventually he became a Warehouse Mechanic, and then an Extra Station Man, before becoming a Control Panel Operator. Unfortunately, Blair suffered severe internal injuries when a 600 lb. piece of metal fell on him while he was working at the Knife Station, which resulted in a yearlong recovery.

Needing a fresh start after the accident, Blair decided to invest his settlement money into the business. He had known the previous owner, and recognized the need for restaurants in the area.

"I've always liked to cook. When I was working at the factory, I would invite guys from the man camp over to the house and feed all of them," Blair said.

The business has been well-received, open 11:00am – 9:00pm seven days a week, and Blair has heard good things from his customers. The menu consists of home cooked goodies such as pork ribs, biscuits, corn bread, mashed potatoes and gravy, macaroni and cheese, peach cobbler, and of course, fried chicken.

"Growing up I remember my dad making really good fried chicken, so I guess I'm using his recipe," said Blair of his father who will be joining him in Sidney this month to help out with the business.

Blair hopes to own the building by the end of the year, perhaps with assistance from Richland Economic Development, and notes that the biggest challenge is the investment.

"Not knowing for sure that it's going to succeed is always scary, but I'm confident that it will work out. People seem to like the food and there's definitely room for another place to eat in town," he commented. "So far, it's been going very well."

Anyone who stops by the grand-opening event will get more than just a hot meal; Bob's Hen House will be giving away 'Make America Great Again' hats on a first come first serve basis. Blair said that he wrote to the Trump – Pence Campaign and that a shipment of hats will be here in time for the grand opening.