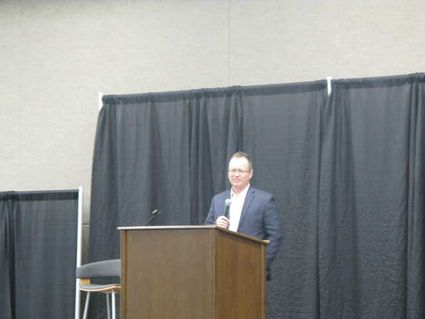 Current North Dakota Lt. Governer and former mayor of Watford City, Brent Sanford, was a special guest at the meeting.

The Watford City Area Chamber of Commerce & Economic Development Corporation held their annual meeting at the Watford City Rough Rider Center on March 1st. The item of the meeting was business and it was clear that Watford City businesses were well represented at the event.

The meeting began with a banquet in which guests toured the event center while visiting tables both representing local organizations and offering a variety of refreshments. The local high school band offered a well-received selection of popular tunes from "Sweet Caroline" to the swing standard "Sing, Sing, Sing" to great applause.

There was a pronounced diversity in attendees, and the Youthful Professionals, an organization with the intent of helping young people expand their professional careers, proved that a new generation of business professionals are well on their way in the Watford area. The University of Mary, making a prominent showing of how well the college has expanded since its founding in 1959, was present to give more information on its programs that have educated many students in the areas of business, health and criminal justice.

The evening was concluded with guest speaker Devin Henderson, professional comedian who has "performed in all 50 states, except Hawaii, Alaska, and like 18 others." His performance included stand-up comedy, musical numbers and magic tricks, with the intent of providing both entertainment and a motivational message - one of understanding perspective when viewing a problem or business situation. Devin's perspective on life, one that was evident among the attendees, can be summed up with his mantra: "When life's hard, laugh harder."