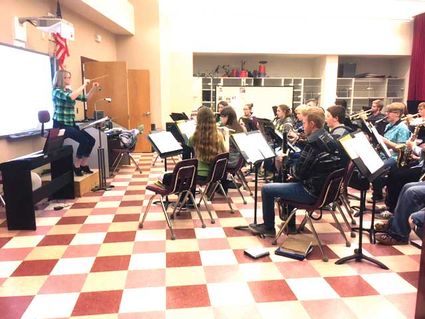 Sidney's High School band students are proud to announce that they will be heading off to Washington D.C. to march in the Independence Day Parade on July 4th, 2017. The band was nominated by United States Senator for Montana Steve Daines to attend the Independence Day Parade. They will be the only school representing Montana at the event. Kilee Sundt explained, "We want to take our performance to the next level. The concert music gets a little harder as the year progresses and right now the band students are playing difficult pieces."

Kilee Sundt is Sidney's High School and Elementary band teacher. Sundt has been teaching in Sidney, Montana for four years now and it was her first teaching job since graduating college. She will be leading the Sidney High School band to march in Washington D.C.

"I am immensely proud of the High School band. They are a hardworking group of individual musicians and when we went to divisional basketball, I had people from other towns comment on how good the band sounded. I know the students take a lot of pride in their playing and they all put in the time to make our band sound even better," said Sundt.

Friday, March 10th Sidney High School band students hosted a Mardi Gra and St. Patrick's Day themed dance at Sidney Middle School. The band students are trying to raise money to go on the trip and just from the dance they raised $1200.

The band students are selling products such as sunglasses, clothing and food. They have been performing and receiving donations from the venues they perform at. "Right now the band parents are spearheading the fundraising activities and are lifesavers for me. I have so much gratitude for them," said Sundt.

Their goals are to continue to play instruments and stay involved with music throughout their lives and to do their best at it. They always want to put in extra time to make the band sound even better. There are still many students that Sundt has taught and they have graduated and are still playing in college and/or are involved in community ensembles. Sundt said, "We are hoping that we will continue to receive support from the community as we push on to make our way to Washington D.C.!"

Purchase your tickets now for a delightful evening of food and music as the band presents Pasta with a Purpose Thursday, April 20 at 6 p.m. at Pella Lutheran Church, Sidney. The event includes an Italian meal, music by the jazz band as well as solos and ensembles, plus a silent auction. Advance tickets are on sale at Sidney High School or from band members for $10 per adult and $7 for students. Tickets at the door will be $15 and $10.