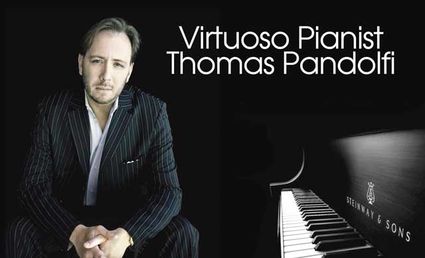 The young American pianist THOMAS PANDOLFI is an exciting virtuoso who, with each passing season, is becoming more and more sought after by audiences worldwide, and showered with superlatives by critics for his passionate artistry and amazing technique. His orchestral appearances often feature not only the beloved masterpiece concerti by Tchaikovsky, Rachmaninov and Liszt, but also the equally brilliant ones by Paderewski, Rubinstein and Moszkowski. Additionally in the "Pops" genre, Thomas is considered a leading interpreter of the works of George Gershwin.

Equally popular as a recitalist, Pandolfi has appeared in concert halls nationwide. The Washington Post has described him as "an artist who is master of both the grand gesture and the sensual line. Pandolfi possesses first-rate technical skills, an unerring comma and of phrasing, a quicksilver touch and cunning legerdemain when it comes to pedaling...etched with calm and crystal clarity...outstanding." New York Concert Review has characterized Pandolfi's interpretations as containing "high level pianism and tasteful, diversified musical ideas...crystalline texture and deft coloration... charm and bracing elan."

While the 2008-09 season marked Thomas' debut recitals in Canada, Germany and China, the 2009-10 season highlighted his debut in London, as well as return engagements throughout Eastern Europe, and concerts both as recitalist and soloist with orchestras across the United States. Pandolfi released his 6th CD album during the 2010-11 season, and returned to China in August of 2011 for his second tour of that country.

A graduate of The Juilliard School, Pandolfi earned both his Bachelor's and Master's degrees as a scholarship student.

"This event made possible in part by the Montana Performing Arts Consortium Presenter Development Program which is supported by grants from the National Endowment for the Arts, Montana Arts Council, and legislative grant from Montana's Cultural Trust, and the Western States Arts Federation."