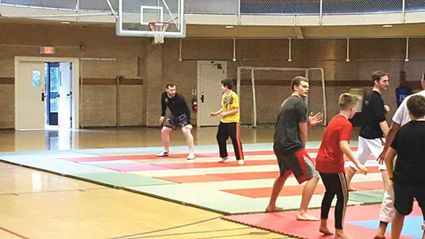 Sidney Tendo had one participant at the USA Taekwondo State Qualifier in Missoula, Montana this weekend.

Caleb Baxter was uncontested in the cadet male blue belt welterweight division. Qualifying in both Poomse (forms) and Gyroogi (sparring), Caleb has earned the right to compete at nationals and represent Montana in both.

Caleb also took part in a seminar with Olympian Stephen Lambdin. Stephen placed 9th as the heavy weight competitor for the US at the 2016 Olympics in Brazil.

Only four people are selected from the US to compete at the Olympics (two male and two female.)

USA Taekwondo is the governing body for Taekwondo in the United States; they sanction all national and international qualifying and ranking events in the US.

They are also the governing body, which selects all US Olympic competitors in Taekwondo.

You can follow Caleb's journey, as well as our other competitors at http://www.facebook.com/sidneytendo.