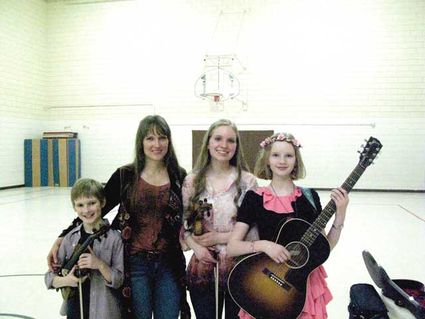 The Benion Family from left to right: Tarquin, 9, mother Daniella, Annika, 14 and Brontë, 12

On Wednesday, April 12th, the Benion children, Annika, 14, Brontë, 12 and Tarquin, 9, held a concert at the Central Elementary School gymnasium in Sidney, MT. The children are members of the Boys and Girls Club of Richland County, and the concert was arranged by that organization.

The show, beginning with Tarquin playing the violin and Annika accompanying on the guitar, consisted of a variety of waltzes and hoedowns with the children exchanging instruments and showing their musical versatility throughout. In the middle of the program, Brontë took center stage to perform two original songs, using guitar and vocals. At twelve years old, she is already a prolific songwriter, having approximately one hundred compositions to her credit.

Daniela Benion, mother of the young musicians was in attendance along with dozens of Central Elementary schoolchildren, who sat in rapt attention until the program ended and there was an opportunity to ask questions, in which there was wild enthusiasm.

Annika explained they each started playing when they were five years old, and they practice anywhere from three to five hours a day. They each play multiple instruments, and take lessons through the internet camera program "Skype" with teachers who are in Mexico and Scotland.