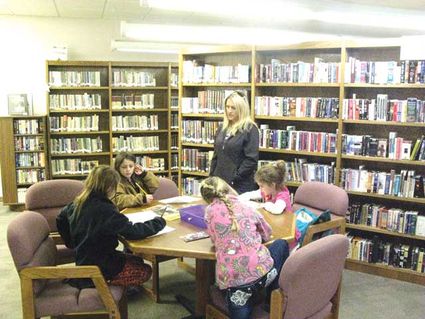 One of the events McKenzie County Public Library held for National Library Week was the hosting of 126 first grade students from Watford City Elementary School on April 11th, where the students learned how to research.

The school has done this annually, although this is the first year they have held it at the library. Ms. Nicole Brew was the teacher who arranged for it to be held at the library, and participating staff included Mrs. Ritter, Mrs. Hill, Mrs. Jensen, Mrs. Mason, Mrs. Krogen, Ms. Rogness, and Ms. Kramer.

The subject that the students researched was the giant panda. Starting at the first of six research "stations", where library director Kathy Trana taught the students how to use the card catalogue, upon hearing a bell the students would rotate to the next stations, including book, video, online, interviewing experts and magazines and photographs.

Following their instruction on research, the children will apply what they have learned to a subject of their own choosing, upon which they will write a research paper.

The children, before starting, sat eagerly on the floor awaiting instruction. "Today we're going to look at how we do research." Ms. Brew stated. "The librarians are going to visit with you about what they do here."

Soon Kathy Trana took the floor. "You can walk into a public library and look at anything you want." After going into further detail, she concluded, "Does anyone have any questions?"

"I've been coming to the library for years." One small boy said confidently upon being chosen.

"I was at the library yesterday!" exclaimed the little girl to next raise her hand.

The children were vastly interested in their areas of study and the McKenzie County Library proved its usefulness once again to the future generation of researchers.