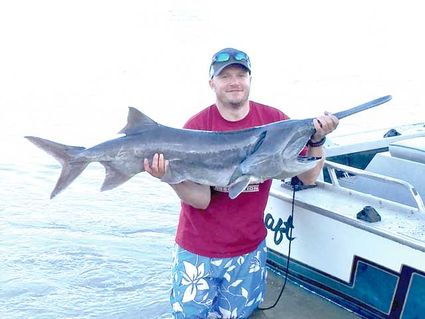 Brady Mueller of Sidney caught this paddlefish on the Yellowstone River on May 28, 2016.

Paddlefishing is an interest that brings people to the area from all over the country as the waters here are ideal, providing the appropriate temperature, water flow, and clean gravel and cobble which make up the fish's habitat. The North American paddlefish, one of only two species in the world, are found in the Missouri, Mississippi, and Yellowstone drainage systems and are only present in twenty-two states.

Paddlefishing season starts May 1 in North Dakota and May 15 in Montana. paddlefish tag may be purchased with a fishing license. The season runs for about two weeks but no longer than June 1st; each year the Fish and Game Department sets a limit on the number of paddlefish that are snagged and once that limit is reached, the season is over, stabilizing the population.

Montana fishermen can donate the roe and receive free cleaning through Yellowstone Caviar in Glendive. Stations are located at the Sidney Bridge and at Intake. Proceeds from the caviar sales are used for grants that enhance eastern Montana and the fishery.

paddlefish - Questions and Answers (for more FAQs go to https://gf.nd.gov/fishing/paddlefish-snagging/faq):

What do paddlefish eat, and how do they do it?

How can you tell how old a paddlefish is, and how long do they live?

The best way to determine age is to use the lower jaw bone called a dentary. Dentaries are removed from the majority of harvested fish during annual snagging seasons, then cleaned and cross-sectioned. Annual rings are counted on the cross sections (much like aging a tree using tree rings).

paddlefish can live to age 60 or older, with females typically living longer than males. Most of the larger fish (more than 50 pounds) are females ranging in age from 15-40 years and averaging about 27 years, while most of the smaller fish (less than 40 pounds) are males from 9-40 years and averaging about 20 years. The presence of a wide range of ages is thought important to the overall health of the population.

How big do paddlefish get, and why are females typically larger than males?

Male and female paddlefish have evolved different strategies for passing genes on to the next generation. For a female, the larger she grows the more eggs she can develop and the more young paddlefish she can potentially produce. For a male a larger size is not nearly as advantageous, because even a small male produces millions of sperm, more than enough to fertilize all the eggs from the largest female. Males mature at a younger age than females so that they may reproduce more often.

Why are paddlefish relatively common in the Williston area when they're so rare or no longer present in other areas within their range?

The short answer is habitat. The overall habitat quality for paddlefish is generally much better for all life stages in Lake Sakakawea and in the Yellowstone and Missouri rivers. paddlefish are finicky spawners, requiring a combination of high flows, right water temperature, and a good substrate of clean gravel and cobble. The Yellowstone River is still a free-flowing, naturally fluctuating river that provides adequate spawning habitat for them in most years. When Lake Sakakawea has a high water level, paddlefish generally find abundant food for growth and maturation. During extended periods of low lake levels, however, plankton is far less abundant and survival of young paddlefish is greatly reduced.

In other parts of its range, habitat quality is generally much poorer. Dam construction, dredging, channelization, and/or excessive water withdrawals for irrigation and municipal and industrial use have significantly changed most large rivers in North America. Few rivers today provide the proper combinations of flow, temperature and gravel substrates suitable for paddlefish spawning. In many states, paddlefish populations have been greatly reduced or even eliminated because of lost spawning habitat.

The harvest cap is intended to keep the adult population from dropping below its current level. Age information is used to estimate how many newly-recruited adult fish are entering the population compared to the number of fish being harvested or lost to natural mortality. A harvest cap of 2,000 fish, equally split between Montana and North Dakota, is appropriate based upon current rates of recruitment. Changes in the allowable harvest will be made, as necessary, to prevent the population from declining.