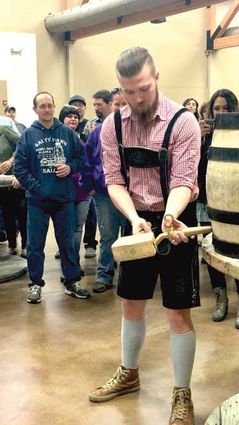 Tapping the firkin at the 6th Annual Bakken Brew Fest.

Well over four hundred eager guests were in attendance at the 6th annual Bakken Brew Fest Saturday, April 22 at the Richland County Event Center. Music was provided by the Two Bit Franks, a bluegrass group based out of Montana. After new Executive Director of the Sidney Area Chamber of Commerce George Culpepper "tapped the firkin", guests sampled beers and wines from brewers out of Montana, Alaska, North Dakota, California, Wyoming, Oregon, Colorado and Wisconsin. At the end of the night votes were collected for the "People's Choice" for the best beer, which was given to the Pink Slip by UberBrew, a brewery based in Billings.

Brandon Taylor, chairman of the Bakken Brew Fest Committee, said of the event, "The last three years we've been getting more brewers from the area. But it's thanks to the Meadowlark that we've gotten many of the brewers. They were a huge part of this." Of the six years that the Brew Fest has been held, this was Taylor's fifth year of being involved. "Every year it's getting increasingly better," said Taylor.