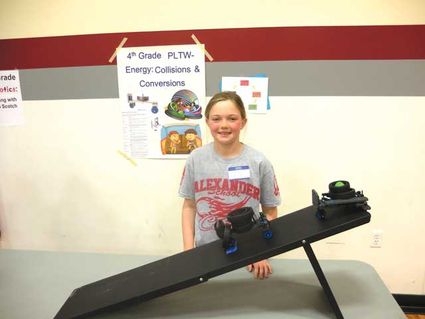 On Monday, May 8th, Alexander Public School held a STEM & Technology Showcase from 6-8 PM. Represented were students from K-12 who built projects that demonstrated their knowledge of engineering and technology. Parents could tour the gymnasium, moving from exhibit to exhibit, starting with the youngest students who had learned basic elements of science and technology, where the exhibition extended to the upper classmen who were demonstrating 3-D printing, computer programming and robots both remote-controlled and robots that achieved mobility using sensors.

This exhibition is a product of a program that the school has instituted, called Project Lead the Way (PLTW). This includes STEM courses (Science, technology, engineering and mathematics) and Project Based Learning. The showcase was held to "demonstrate the knowledge and skills our students have gained through these initiatives."

One group of students won five awards for the 2015-16 North Dakota Championship Tournament in the FIRST Tech Challenge, a "robotics competition that allows students to compete head-to-head using a sports model."

Beginning two years ago, the programming is taught to students from kindergarten to 12th grade. Cathy White, Stem and Robotics Program coach, said of the program, "math and science scores have increased exponentially. It's fantastic to see."