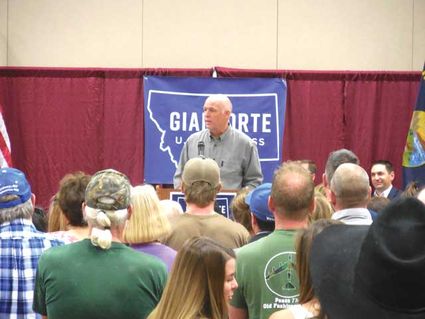 Greg Gianforte addresses his supporters at the rally held in Sidney.

A rally was held in Sidney on Thursday May 11th for the campaign of Greg Gianforte, the Republican nominee running for Montana's House seat in the May 25th special election. The seat, vacated after Incumbent Representative Ryan Zinke took the appointment of the United States Secretary of the Interior, necessitated the special election which Montana Governor Steve Bullock called for within 100 days of Zinke vacating the seat. Present at the rally were Chris Cox, executive member of the National Rifle Association and Donald Trump, Jr.

At the Richland County Event Center an enthusiastic crowd of Gianforte and Trump supporters waited outside in a brief, light rain at 2:00 in the afternoon, most wearing Gianforte stickers as they waited to enter the event center. Once inside, the air was buzzing with excitement as the crowd waited for the speeches to begin.

Gianforte began his speech with vigor and good humor, calling his opponent Rob Quist, "Nancy Pelosi in a cowboy hat."

Included in Gianforte's platform is senatorial term limits. "I don't think our forefathers ever envisioned career politicians and that's why I'm for term limits." Speaking upon the current state of D.C., Gianforte said, "I've seen the good, the bad and the ugly in Washington, and the bad far outweighs the good."

Upon the subject of the Second Amendment, Gianforte disagrees with his opponent Rob Quist. Gianforte quoted Quist as explaining that Montanans should "register our guns like we register our cars." Cox said, "When you talk about registering guns you're doing it for one of two reasons – to tax 'em or take 'em."

Cox explained that Gianforte has an A rating in the NRA, and upon Quist's rating, he said, "It takes a lot of effort to get an F rating in the National Rifle Association, but he earned it."

Gianforte extolled the virtues of protecting public lands, but also warned against "environmental extremists who are extinguishing our way of life." Gianforte is also campaigning on states' rights, limited Federal government, strong military and borders, and lower taxes.

When asked whether Gianforte would work with the Democrats, he explained that he would, and gave an example of doing so previously. He spoke about working with both Democrat and Republican county commissioners in Paradise Valley when he came out against opening a mine in the area.

Donald Trump, Jr. stepped up to speak in front of a rapt audience when Gianforte finished speaking

. "It's great to come to Eastern Montana because I know this is Trump country." He said to rousing applause. Trump explained that he visits Montana for the hunting and fishing. About Gianforte, Trump said, "He reminds me a lot of my father." He explained that both Trump, Sr. and Gianforte are both businessmen newly stepping into politics. About the Republican nominee, he cited his history of creating jobs and his future role if elected. "There are many families, households depending on his success."

On the subject of the Democrats, he explained his feelings that they are complacent. "They didn't learn anything from this last election cycle." However, Trump was optimistic about the future of the Republican party, but gave a challenge to the people when he stated, "We need more people who have the guts to step away from an easy life. Greg is willing to jump into the swamp and help my father do what needs to be done." He encouraged the audience to do the same, "with common sense and a work ethic, something that is lacking in D.C...Let's win this thing and let's show D.C. we mean business." 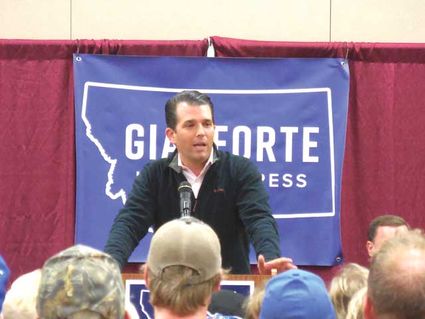 Gianforte is continuing the Trump method of campaigning at the grassroots. He has driven thousands of miles back and forth across the state and has visited every county in the state over the past 18 months. If elected, Gianforte will be Montana's sole Representative of the Montana's at-large congressional district. It is the nation's largest congressional district with a population of over one million constituents.