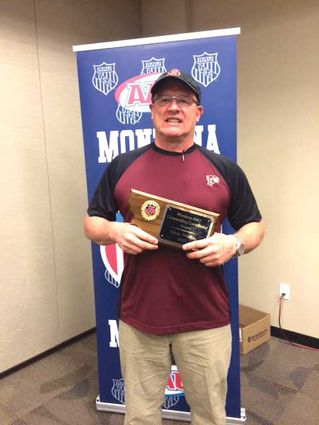 With more than thirty years on the books, and over 400 match wins and eight state titles, longtime Sidney Eagles wrestling coach Guy Melby was recognized as the AAU Outstanding Contributor in early May.

The Outstanding Contributor award is given to a coach, officer or committee member engaged in the activities of the AAU, the Amateur Athletic Union.

Melby is currently a District Officer and Folkstyle Chairman for the Montana AAU, and one of four coaches of the Sidney Wrestling Club. Melby's been an integral player in bringing teams of students to Middle School Nationals in Des Moines, Iowa, and to the Disney Duals in Orlando, Florida, as well as overseas to Australia and Paris. He has also helped organize and coach wrestlers at various clinics and camps.

In all, Melby has accompanied thousands of Montana students to showcase their wrestling talents across the country, with many more in the future. Melby has certainly proved himself as an outstanding contributor to wrestling in Montana.