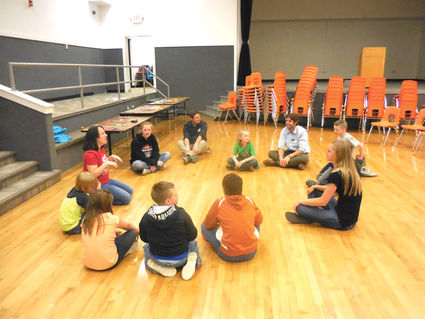 Savage Public School held its first ever Writing Carnival on May 17th. The carnival, an all-day K-12 event, is intended to open up all avenues of writing for students and to share their work with peers. The carnival began at the beginning of the school day, where students were divided into groups and given their first task.

From there, the individual groups traveled around Savage to five different writing stations, including the Fire House and the Museum, where they were given writing prompts. Fifteen minutes was what each group had to learn about their particular station and start to come up with what they were going to write. At 10:00, the students returned to the gym where they could share what they had written at the microphone.

After sharing what they had written, the students were then informed what the day would hold in store for them, including a ticketing system where the students would receive tickets for their work, and at the end of the day cash the tickets in for prizes.

At the end of the day, the students returned to their respective classrooms in order to create time capsules which they will open upon graduation. Their last writing assignment at the end of the day was to write letters or provide photos for their future self.