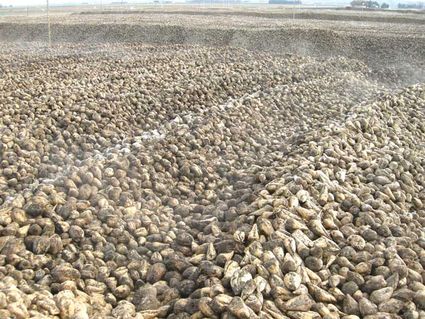 Ridges on top of this sugarbeet pile are smoothed out like those in the background to prevent spoilage.

It's a bit unusual to see a Sno Cat driving on top of a huge pile of sugar beets, but Richard Albin was doing just that last week at the Sugar Valley station, Fairview. Now that beet harvest is complete, the goal at Sidney Sugars is to keep those beets at their optimum quality until all the processing is done, about mid-February.

The science of storage has been studied extensively by Kelly Thomas, plant physiologist/ genetics with American Crystal. Through years of study, Thomas has documented the activity in beet piles and how storage can be improved. During harvest, the pilers create ridges at the top, creating a chimney effect which creates hot spots when the beets respirate.

In 1992, Roger Hill, president of Sidney Sugars, Don Lind, Sidney factory manager, Dave Melin agricultural manager and Albin devised a plan to even out the ridges to better preserve the beets. Albin uses a Bombardier 350 h.p. Sno Cat with a 14' blade to level the tops of the beet piles in the Sidney Sugars growing area. He was headed to Savage next and possibly on to Billings. He's leveled beet piles as far away as Greely, CO and is on his 5th machine. He enjoys the work and says, "I'd be plowing snow in Red Lodge this winter if I didn't have cattle to feed every day." He will also plow snow off the beet piles this winter if needed.

Sidney Sugars also uses passive and forced air ventilation to cool the beets. This year 72,000 tons are under passive ventilation with another 95,000 in Fairview and Sidney under forced air, which is a huge increase from last year. The goal is to give the beets a good chill, but not freeze, so fans are run at certain temperature ranges. Agriculturalists Kathryn Cayko at Sugar Valley and Vanessa Pooch at the factory yard are on call 24/7. They both set alarms to alert them if the temperature gets too warm and they have to get the fans turned on, even if it's at 2 a.m. That regimen typically lasts until December, or the first good snow fall, or when the temperature hits 0 degrees. "The beets store really well with the cold air from the first few months," Cayko said. 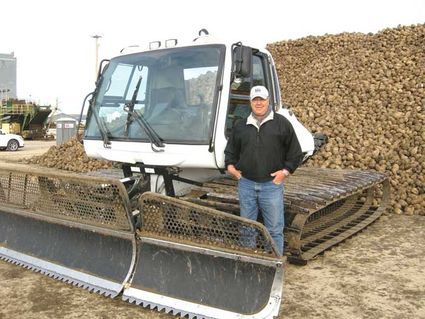 Richard Albin stands beside his Sno Cat after completing work at the Sugar Valley station.

Sidney Sugars flies the piles and uses an infared camera to capture the temperature of the beets. This year they will also utilize a company out of Watford City that employs drones. The fly-overs show a dramatic difference in the temperature of the beets with forced air ventilation, and they also show any trouble spots that may need to be dealt with. Depending on the results, Sidney Sugars hopes to do more with drones in the future. The first test will take place next week with fly-overs continuing once a month through campaign.

Final results are in for this year's harvest with 31.2 tonnage and 17.99 sugar. All beets have been hauled from the Culbertson area and Powder River should be completed next week. Non-vented beets should be at the factory by mid to late January followed by passive, then forced air ventilated beets.