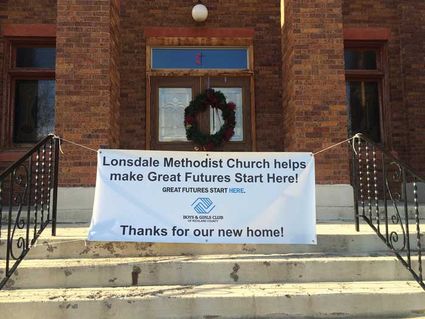 Sign in front of the future home of the Boys & Girls Club at the Lonsdale Methodist Church.

A lot has changed in the MonDak Region in the post oil-boom period, but perhaps none as substantial as the future expansion of the Boys & Girls Club of Richland County.

In November, the Club officially announced a partnership between the Club and the Lonsdale United Methodist Church, across the street from the Club's current location at Central School. The Lonsdale congregation voted unanimously to transfer ownership of the main church building to the Club, with the intention to share the space.

The partnership, Lonsdale Pastor Melanie Martin-Dent explained, is mutually beneficial, using the building to provide "a valuable service to children and families of our community, very much in line with the Methodist mission to 'do all the good you can, to all the people you can'." Church membership has declined in recent years, so as church leaders looked toward the future, they developed a "Transition Team", made of members tasked with exploring ideas to build a stronger church. "One of the members, John Redman, came up with the idea of working with the Boys & Girls Club. In meeting with the congregation, this is the idea that garnered the most support. We have been blessed to be a blessing to others-we have space we don't need and the Boys & Girls Club needs space," explained Martin-Dent.

Boys & Girls Club CEO Elaine Stedman said initially she was "taken back," by the offer from the church, "because I didn't know how it would work, but it all happened very quickly." Members of the church approached Stedman only about six months ago, and the first phase of the transition will begin in January with renovations to allow the Club some much-needed space, while preserving the church space for worship and regular church activities.

In early December, Stedman and her staff invited the community to tour the Club's new home, and presented blueprints of future expansion. For the first phase of the transition, the Club will move into part of the church building, renovating parts of the building to best fit the needs of both groups.

"The church will continue to do all its regular activities," said Pastor Martin-Dent. "We will worship in the sanctuary, have space for groups to meet in, the pastor will still have an office in the building, and the church will have access to the kitchen and fellowship hall in the hours it is not being used by the Club. We can have weddings, funerals and special events."

The move comes at the right time for the Club, which currently has office space in Central School, and uses classroom space for programming. "We are absolutely maxed out in terms of space," Stedman said, a point which is evident upon entrance to the Club office. Walls are stacked high with organizers, totes of supplies, and paperwork, in addition to desks and workspace for several employees. "The teachers have been very gracious to share their space with us, and we are grateful," Stedman said.

Stedman anticipates beginning programming in the renovated space in the fall of 2018, where they will continue to serve the kindergarten through fifth grade students. By fall of 2019, Stedman expects to begin serving older children and teens with the second phase of the building project. According to the tentative blueprints presented at the December tours, the Club will include a dedicated teen center, commercial kitchen, green space, and a multipurpose gymnasium. Most of the additional facilities would be available for public use when the Club is not in session, fulfilling a decade-long community need identified in the State of the Community County-Wide Conferences and incorporated into the Richland County Strategic Plan.

The funds raised to support the construction of the proposed new facility near the hospital will be used to fund part of the immediate renovations, and fundraising will continue to help meet the Club goals. 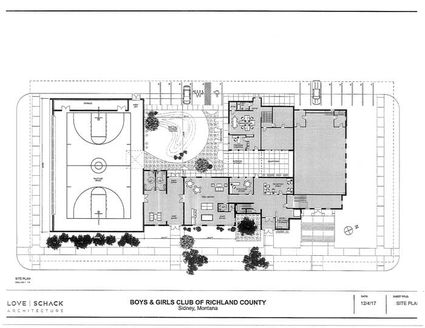 As for the future of the Lonsdale Church, Pastor Martin-Dent is working on gathering input from focus groups to determine the path of the church. "I have 8 or 9 people who have agreed to be a part of it and will schedule our first meeting in January. I plan to meet with this group and talk about what we hope to do, then meet together with the Transition Team," she explained. "We hope to build bridges of understanding between the generations and remove stereotypes in order that we might develop good relationships with the families who will be sharing our space."

Ultimately, the transition to shared space is anticipated to be smooth, and fulfil the needs of both organizations, as well as the community.

"It's a win-win for all," concluded Stedman.