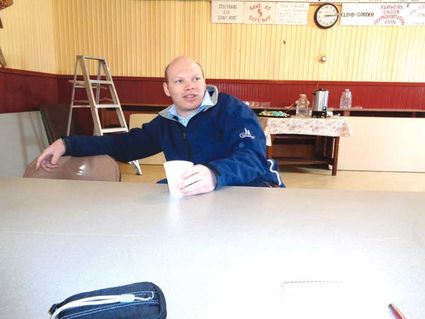 In a wide range discussion at Girard Hall, Krautter was asked about his stance on many issues affecting Richland County and Montana. He stated his firm desire to take his problem solving abilities to Helena and to always put the needs of Richland County first.

He is generally opposed to the proposed Yellowstone Disposal facility, citing concerns about the implications if it is not done right. He also questioned whether Montana is more lenient and maybe lagging in regulations concerning nuclear waste.

Krautter voiced very cautious support for a sales tax and being able to tap into the huge tourism industry in Montana as well as on line shopping, but only with the requirement that property taxes be reduced accordingly. His concerns included possible increases in the future when the state needs more funding. "I would be very cautious because I know how government works," he said.

When asked about some common sense gun control provisions, Krautter stated that he is opposed to anything restricting second amendment rights and he is a member of the NRA. However, he said he would be looking for input from residents of HD35. He said there are loopholes in every law and that someone wanting to harm others would always find a way to do that. He is also concerned about mental health restrictions stating that people may not seek treatment if they believe that their gun rights will be restricted.

Krautter acknowledged problems with the public defenders system in Montana but did not have specific ideas on how best to fix them, citing budget concerns. He suggested better management as a possibility rather than just throwing money at the problem. "I will work to improve better representation for everyone," he stated.

Krautter supports the current system regarding the death penalty and wants it left up to local county attorneys whether to pursue that option in individual cases. He is pro life and donates money and time to life affirming entities such as the Sunrise Women's Clinic in Sidney. He would generally support legislation on pro life causes but would look at each bill and determine what it is before committing.

Krautter said he would listen to local leaders on infrastructure needs and support responsible investments based on needs, not wants. Since there are fewer representatives from the eastern part of the state, he discussed the need to build relationships with fellow lawmakers and educate them on the needs of this part of the state. He stated the need to give and take but said he would dig in his heels on some issues and try to be flexible on others, and to decide on a piece by piece basis, always considering what was best for HD 35.

Regarding public and private school funding, Krautter said he would work to protect funding for public schools in Richland County and cited the need for good, quality schools in rural areas. He also voiced his support for local school boards and local decisions on education.

Krautter agreed with the need to keep in touch with residents in his district including articles in the papers and possibly reviving legislative call-ins.

Currently an attorney in the Netzer Law Firm in Sidney, Krautter was raised in a conservative Republican home but he always wanted to figure things out for himself. When he entered college, he was idealistic with a desire to help others and briefly became a conservative Democrat, remaining pro life and pro second amendment. He later realized that handouts were not the solution and by his senior year was a member of the college Republicans.

Krautter vowed, if elected, to put the needs of the community first and to keep focused on what's best for the district. He faces fellow Republican Tanya Rost in the primary election on June 5.