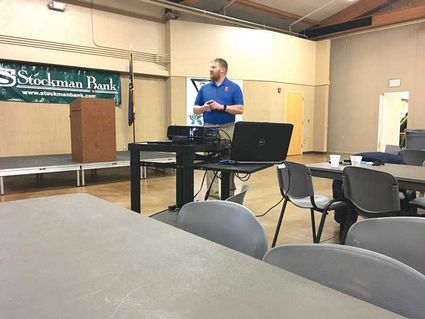 Pat Gilchrist, of the NOAA National Weather Service in Glasgow, provides weather predictions and explains how weather can affect agriculture in Northeast Montana.

The MonDak Ag Days and Trade Show recently hosted Pat Gilchrist, who explained past weather trends and predicted upcoming weather trends that may or may not have a negative impact on Eastern Montana agriculture.

Gilchrist serves as the National Weather Service Early Warning Coordination Meteorologist in Glasgow, Montana, which is the regional office for the National Oceanic and Atmospheric Administration, the scientific agency within the United States Department of Commerce that focuses on the condition of oceans and atmosphere of the planet, paying special attention to weather conditions that may affect American health, safety or commerce. Gilchrist focused his presentation on what he perceives to be a warming trend that could impact farming and ranching in the immediate area.

It is the temperamental nature of our local climate that makes weather predictions so important, according to Gilchrist. He explained, "Over the last twelve months, you can see a mixed bag when it comes to precipitation. It has been a record dry year and summer. By and large, most of the region saw very dry conditions and that's been true for twelve months. We went into the winter in a terrible drought – perhaps even worse than in 1988 – but with this drought, all the systems we saw pushing in on us split around us. We got completely missed."

Gilchrist explained what he called, "teleconnection," how weather patterns like an "El Nina" can affect weather here. He says, "Snow depth wise, there's some good news out there. Snow pack in the mountains is doing really well, with a hundred plus inches. That extends from the mountains to the foot hills to even places in central Montana like Jordan. The problem is when you come further this way, towards Sidney, Plentywood, and Glasgow, we haven't seen much snow or moisture. We're still talking about a 4 or 5 inch difference in terms of soil moisture permeation."

Planes are used by the NOAA to fly over the area and use special instrumentation in the air to detect snow pack. What they reveal is that Western and Central Montana look like promising years for moisture, but it's still touch and go for Eastern Montana. This February was the seventh coldest year on record and the tenth snowiest for our record, according to Gilchrist.

Using Power Point, Gilchrist showed figures explaining that even though there have been recent increases in moisture, overcoming a four or five inch deficit in soil moisture is difficult and will take consistent rainfall to create an optimum environment for agriculture.

Gilchrist explained how weather across the world affects us here, saying, "When we start to look way out in the future and look at a two week, one month, or one year forecast, we look at lots of different sets of data. We can clue in on the water temperature in South America and other various oscillations that can affect our weather here.

According to Gilchirst, the weather is getting warmer. He said, "We are not getting as cold in the winter time. I can remember talking with my grandfather and it was significantly colder then...and when I started looking at the information, it actually was colder back then. We're not getting as cold in the winter time and that makes us think about impacts over the next 50 or 100 years. For example, with insects in the winter, are we suddenly going to see a difference with insects or invasive species in the grasslands?"

A week earlier, on February 23, Gilchrist spoke at the "Brownbagger Series" at the Sidney Agriculture Research Sciences Laboratory on the topic of climate change. In a presentation entitled, "A Look at Climate Change and Northeast Montana," Gilchrist explained that in his opinion, Montana has shown a warming trend from the 1950s to 2015. Interestingly, Central Montana has increased in average temperature about .5 degrees and Northeast Montana about .47 degrees.

"Adaptability to this is going to be key, going forward," said Gilchrist. "Since the 1980s there's been a definite trend. This is all indicative of climate change and the overall warming of the atmosphere."

Gilchrist explained that their future projections for climate change are far worse than what has actually been observed. Models show an increase because of carbon dioxide production.