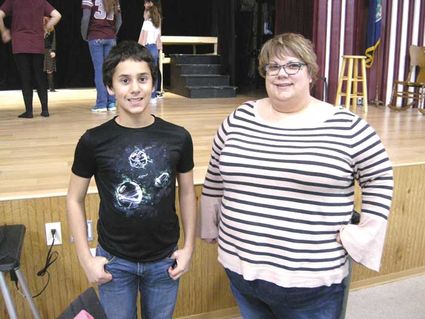 Cast member Gage Johnson and Director Christy Pierce are both excited to be part of this play. (Photo by Jaymi Loobey)

Friday, April 13, through Sunday, April 15, the Sidney High School Drama Club is putting on a play called The Beverly Hillbillies. It will be performed in the Sidney Middle School auditorium at 415 S. Central Avenue. Friday and Saturday the production will start at 7 p.m., while on Sunday it will start early at 2 p.m.

This play is based on its namesake, The Beverly Hillbillies, a sitcom which aired from 1962 to 1971. The sitcom also inspired a remake film by 20th Century Fox done in 1993. This specific play was picked so that high school senior, Kyle Topp, could have her chance at playing Granny. The cast consists of mostly high school students but a few middle school students stepped up to fill a few remaining roles. The entire cast seems excited. Drama coach Christy Pierce is the director. She also directed the drama club's previous play, Sherlock Holmes. When asked how long she had been directing the high school plays Christy said, "This is my fifth year directing plays but I've been a drama coach for eight years." In preparation for the play, the cast has been meeting Mondays through Thursdays after school to have a great time and rehearse their parts. This will be the last play performed by the high school drama club for the 2017-2018 school year. The Middle school drama club will have one more play, however, called Transyl-mania. This play will not be performed until May.

The Beverly Hillbillies was a popular series. It ran for nine seasons and was ranked twice during its run as number one series of the year. The Beverly Hillbillies is about a poor man and his family who suddenly become rich when oil is found on their land. Then they move into a mansion in Beverly Hills, California bringing their country ways with them.