Watford City Woman to be Featured on Lifetime Network Program 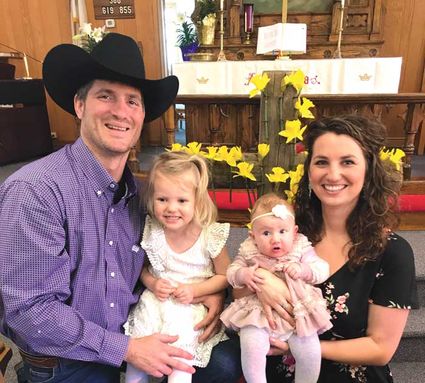 Jessie Veeder Scofield had no idea what to expect when she received an unexpected phone call early in the spring of 2017. It was the feminine based TV network, Lifetime. They were looking for a woman in every state who wished to share their story and she was chosen for North Dakota. Jessie said, "I was excited to be chosen to be a part of this." She had lots of stories. Jessie had grown up on a cattle ranch outside of Watford City that had been in her family for generations but, like many people in rural America, they could not do just one thing. Jessie's father was a musician and folksinger. When Jessie was a child she would sing alongside him. He taught her to play the guitar at twelve and by sixteen, Jessie was writing her own songs and albums. Branching from her music, Jessie also began to write poems. When she went to college at the University of North Dakota she also ended up editing the college newspaper. Now, she writes columns for Forum Communications, edits Prairie Parent, keeps a blog and wrote a book in 2017 called "Coming Home" alongside continuing to perform.

It has not all gone well for Jessie, however. When she graduated from UND with her degree in communications she married Chad, her high school sweetheart, and they moved back to Watford City so they could help with her family's ranch and raise a family in the country. They did their best but Jessie had multiple miscarriages. With specialty healthcare being so difficult to come by in rural North Dakota she had no diagnosis and they gave up for a while on that part of their dream. Then she saw a doctor out of Minneapolis and got her diagnosis. She had polycystic ovary syndrome but now she had a treatment and hope. She began blogging about her experiences as a mother, musician, writer, and rancher and that was how Lifetime found her.

After the 2016 Elections, Lifetime realized they did not know as much about their audience as they thought. They interviewed a woman for each of the fifty states and did it to explore their target audience. Lifetime explained on their project's website that they asked the women "If you could broadcast your story to the world, what would you share?" Jessie Veeder was perfect for North Dakota. People are curious about the struggles people go through up here. Even Jessie noticed it while touring to share her folk songs. She said, "People were really curious about what life was like up here." She did several interviews for the project followed by a visit from a photographer to the ranch then one last phone call from a journalist and Jessie had a spot in Lifetime's project "Her America" The website became active on February 12, 2018 and had a few spots on-air. The videos, pictures, and articles for all the women who were part of this project can be viewed at http://www.heramerica.com. Jessie hopes that her story can bring hope to other women experiencing pregnancy loss and fertility issues. Jessie now lives with her husband, Chad, and their two little girls on her family's ranch outside of Watford City, North Dakota.