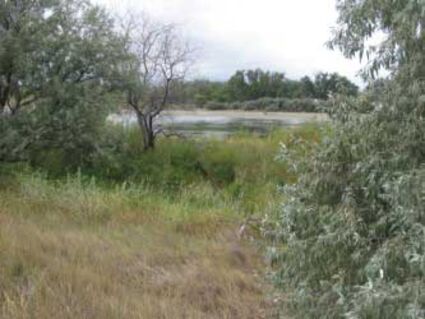 Many invasive trees can be found around the Eastern Montana and Western North Dakota area. Although there are few invasive tree species, they can still cause significant problems. So in order to help land managers target control methods for these invasive tree species, John Gaskin researches and studies genetics of plant invasions at the USDA Agricultural Lab located in Sidney, MT.

Gaskin (botanist/research leader) and a group of scientists and technicians at the USDA Agricultural Lab work to solve weed and insect pest problems that impact agriculture. These include grasshoppers, wheat stem sawfly, and invasive plants.

Gaskin said, "Our lab and other groups have been running experiments on how to remove Russian olive and restore the habitat to one that is useful for native wildlife. There is also research going on to develop a biological control insect that eats the fruit of Russian olive. That would help stop the spreading of the species while still allowing existing trees to be used as windbreaks and shelter for deer. For my part, I use genetic tools such as DNA sequencing to determine where invasive plants have come from. We need to know fairly precise origins of our invasive species so that we can search for insects and diseases overseas that might help us control the invasive plants in the USA. I also use genetic tools to determine if the invasive plant species are hybridizing with other invasive or native species."

Invasive plants are typically from other countries and are spreading and causing damage to rangelands and natural areas. There are about 160 invasive tree species in North America, and almost 600 species worldwide. "There are many invasive species around the world such as the American pine tree species invading other countries to large woody shrubs invading our deserts to trees from Australia taking over the Everglades in Florida," said Gaskin.

Two common invasive tree species found in the MonDak region are Saltcedars and Russian Olives. Saltcedars are big woody shrubs/trees from Asia that create thick forests along rivers and reservoirs. Russian olive trees are also from Asia and invade areas such as coulees and rivers. They are valued as ornamentals and make good windbreaks in dry regions; they also push out other tree species. Russian olives are thorny and prevent access to the river, and are poor trees for native nesting birds since the bark has few cavities, unlike cottonwoods. Also, bats and other native wildlife diversity drops when Russian olives dominate the riverway. "Both species were originally planted as ornamentals and windbreaks, and they have spread to natural areas where they push out native plants and change the biological community in ways that are mostly negative. A tree that is just getting on our radar in Montana is common Buckthorn from Eurasia. This tree invades areas but is also the host for Soybean Aphid; also from Eurasia. Soybean Aphids must over-winter on Buckthorn tree species, so if there are no Buckthorns nearby there is a much lower risk of the aphid getting into soybean fields and damaging the crop," explained Gaskin.

"Invasive species are usually not native to the region. Most of our invasive plants are from similar habitats in other countries, and we introduced them accidentally or intentionally. One reason that they reproduce and spread so effectively is that they have escaped from their natural enemies (insects and diseases). These natural enemies have kept them under control in their native country. Without enemies here, they have the ability to take over a landscape and drive out desirable and native species. Additionally, since trees are so big, their height and size can have a large effect on what grows and lives underneath and around them. Most of our native plants and animals have adapted to live with native trees like cottonwoods, but may not be adapted to live in a forest of non-native trees," explained Gaskin.

The methods for controlling invasive trees vary depending on the species and habitat. Some options include a combination of cutting them down, spraying them with herbicides, and biological control. Gaskin's research team uses an insect or disease that has evolved over millennia to only attack the invasive tree species.

Gaskin suggests contacting your county weed coordinator or state agriculture department for information on how to control each individual invasive tree species. He also recommends following noxious weed laws, which are available on the Internet. There are also lists of the species that you should not plant in your area. Gaskin said, "Native trees are a good choice since they are adapted to our region and rainfall, are hardy, and can provide good resources for native birds and insects. If you choose a non-native tree, first investigate to make sure it is a species that will not spread beyond your garden."